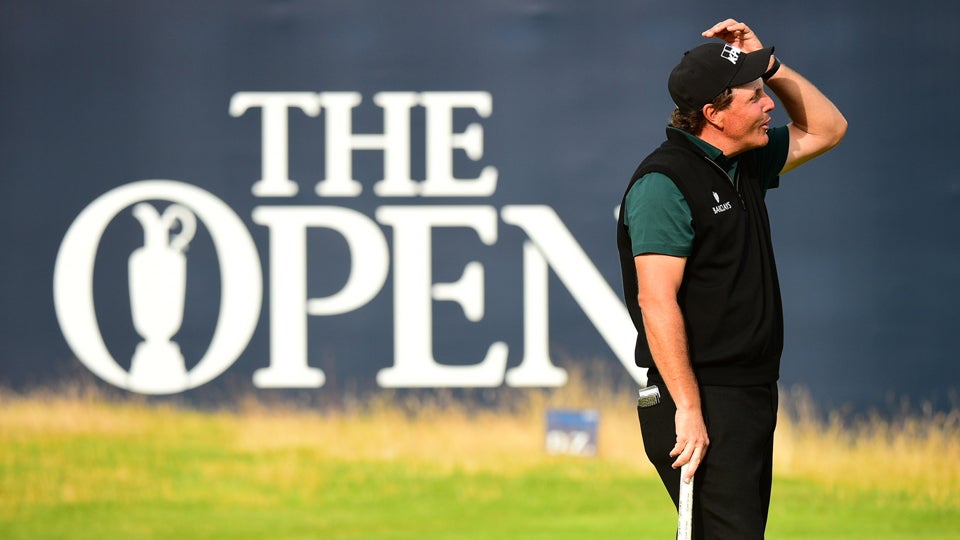 Phil Mickelson reacts after missing a putt for 62 during the first round of the 2016 British Open at Royal Troon.
Kohjiro Kinno for SI

Raise your hand if you expected to see a pair of 63s at Royal Troon in the British Open. If you raised your hand, you’re a liar.

Phil Mickelson’s 63 in the British Open’s opening round Thursday was the 28th score of 63 in men’s major championship golf and Sweden’s Henrik Stenson posted No. 29 when he dropped a curling birdie putt in the back door at the 72nd hole to outlast Mickelson and win the Open. It was impressive golf all the way around. Stenson becomes only the second player to shoot 63 in the final round and win, joining Johnny Miller, who famously did likewise to win the 1973 U.S. Open. There was minor irony Sunday when NBC broadcast its first British Open and had Miller in the analyst’s role.

Forty-three years later, Miller’s score still stands as the lowest in men’s major golf, although Mickelson just missed finally taking him off the books when his birdie putt for 62 on the final green barely lipped out.

Phil’s subsequent 63 still makes the top 10 list even though he didn’t win—OK, I cheated and created a three-way tie at ninth, so sue me. Stenson jumps onto the list at No. 2, behind Miller.

1. Johnny Miller, 1973 U.S. Open. This is No. 1 because Miller did it first and was the only player to shoot his 63 (eight under par, by the way) in the final round to win until Henrik Stenson matched him at the 2016 British Open. Miller hit every green in regulation in rain-softened conditions, although only three other players broke 70 that day, led by Lanny Wadkins’ 65. Really, if anyone in history should’ve gone lower than 63, it was Miller. He three-putted the 8th for his only bogey and sharply lipped out birdie putts on the last two holes. It “easily could’ve been 60,” conceded playing partner Miller Barber. Imagine if the first sub-64 score in major history had, indeed, been 60?

2. Henrik Stenson, 2016 British Open. You could make a case for Stenson’s 63 to maybe be No. 1 on the list. After all, he had 10 birdies at Royal Troon on a day when runner-up Phil Mickelson’s 65 was the only other score posted better than 67. So it wasn’t like the field lit up Troon once the wind subsided mid-afternoon. Still, Miller did it with persimmon woods, a balata ball and on a course where you didn’t have the luxury of hitting irons off the tees on a lot of holes. A great round, though, just a notch behind Miller’s.

3. Nick Price, 1986 Masters. This amazing nine-under third round began with Price bogeying the opening hole after finding the fairway bunker. He rallied with 10 birdies despite not reaching any of the par-5 holes in two, shot 30 on the back nine and watched his 30-footer birdie putt on the final green circle the cup and spin out. Plus, Augusta National is so scoring-resistant that the course record of 64 set by Lloyd Mangrum had stood for 46 years. Price, who finished fifth, famously quipped of his last near-miss, “I think Bobby Jones reached up, popped the ball out of the hole and said, That’s enough!”

4. Gary Player, 1984 PGA Championship. Shoal Creek was seven years old when Player, who was 48 years old, lit it up with 10 birdies in the second round. The next best score that day was five shots higher. Player missed a five-foot putt for par at the 12th, and birdie putts of 8 and 12 feet at the 16th and 18th. “I had a good opportunity to break 60,” said Player, who finished runner-up to Lee Trevino. It was impressive stuff.

5. Raymond Floyd, 1982 PGA Championship. It was 102 degrees in Tulsa—isn’t it always?—for the PGA’s first round but Floyd was just as hot. An early starter, he piled up nine straight 3s starting at Southern Hills’ 6th hole and shot seven under par on a day when only 17 of 150 players broke par. Floyd’s bogey-free 63 was three strokes better than Greg Norman and Bob Gilder and, he said, “the best round of golf I’ve ever played.” He impressively birdied the 12th and 18th, then two of America’s most-feared par 4s. Floyd won the PGA by three over Lanny Wadkins.

6. Jack Nicklaus, 1980 U.S. Open. It appeared as if Nicklaus would continue his winless 1979 drought when he bogeyed the 1st hole in the opening round at Baltusrol but then he poured in eight birdies for an attention-getting seven-under-par performance that sparked his victory and a surge of “Jack is back!” headlines. He chipped to three feet on the final green and missed a short putt for birdie and 62. “If that putt lipped out, it would’ve dribbled seven or eight feet away and I might have shot 64, not 62 or 63,” he said. “I chickened out.” Back at Baltusrol in 2005, Nicklaus recalled the miss: “I’m still mad about it.”

6A. Tom Weiskopf, 1980 U.S. Open. You can’t discount a 63 just because a second player shot it the same day. Weiskopf matched the Nicklaus 63 later that Thursday afternoon, prompting Tour player John Schroeder to joke, “The USGA is going to be planting trees all night.” Like Nicklaus, Weiskopf also failed to birdie the 18th, a short par-5, when he dumped a 95-yard wedge shot into a greenside bunker. Was money a factor in either failed 62? Golf Magazine was offering $50,000 to anyone who broke 63 in the Open. First prize for winning the Open that year was $55,000, so it was a significant bonus. “I never thought about the fifty thousand,” Weiskopf admitted, “until the 18th tee.” Weiskopf didn’t break 75 the next three rounds.

8. Greg Norman, 1996 Masters. When Norman began the tournament with a nine-birdie no-bogey performance, it was so superlative that it sparked Grand Slam murmurs among a few media. He was even through six holes, then stunningly birdied nine of the last 12. “On a scale of 1 to 10, I’d have to say it’s a 9,” Norman, 41, said of his second 63 in a major. His birdie-birdie finish tied the course record of his close friend, Price, and he actually had a bit of luck—his final 25-foot birdie putt looked off-line until it hit a spike mark and veered into the cup. This round is little remembered because Norman famously lost a six-shot lead and collapsed the last day, ending in a consolation hug with champ Nick Faldo.

9T. Phil Mickelson, 2016 British Open. So Royal Troon was gettable in the opening round but 63 is still a remarkable score, especially when Mickelson lipped out for birdie on the final green for a historic 62. Phil made an indelible mark with this eight-under-par 63, which was three shots better than the next best score. Mickelson, who was the runner-up after Henrik Stenson shot a 63 of his own during a Sunday duel, is going to enjoy the fact that he’s sharing the last spot on this list with his pal, Tiger. 9T. Tiger Woods, 2007 PGA Championship. The tree-lined fairways and many awkward dog-leg holes at Southern Hills made it an unlikely candidate to be overpowered, but Woods did just that, shooting seven under in the second round, two shots better than Phil Mickelson’s 65, the next-best score. Woods made eight birdies to open a two-shot lead at the halfway mark and eventually outlasted scrappy Woody Austin to win. Tiger’s 15-foot birdie try on the 72nd dipped partway into the cup, then impossibly spun out. Woods called it a “62-and-a-half” and added with appropriate understatement, “That would’ve been a nice little record to have.”

9T. Greg Norman, 1986 British Open. Fierce first-round weather caused 48 scores of 80 or worse but Norman lead a scoring charge in calmer conditions the second day, shooting seven under, three strokes lower than anyone else at Turnberry, hosting only its second Open. Norman missed an 18-foot putt for eagle at the 17th, and three-putted the 5th and 18th holes. “I’m totally disappointed not to get 62 or better,” Norman said. The 63 gave him the cushion he rode to his first major championship in a year in which he held or shared the lead in all four majors after 54 holes.