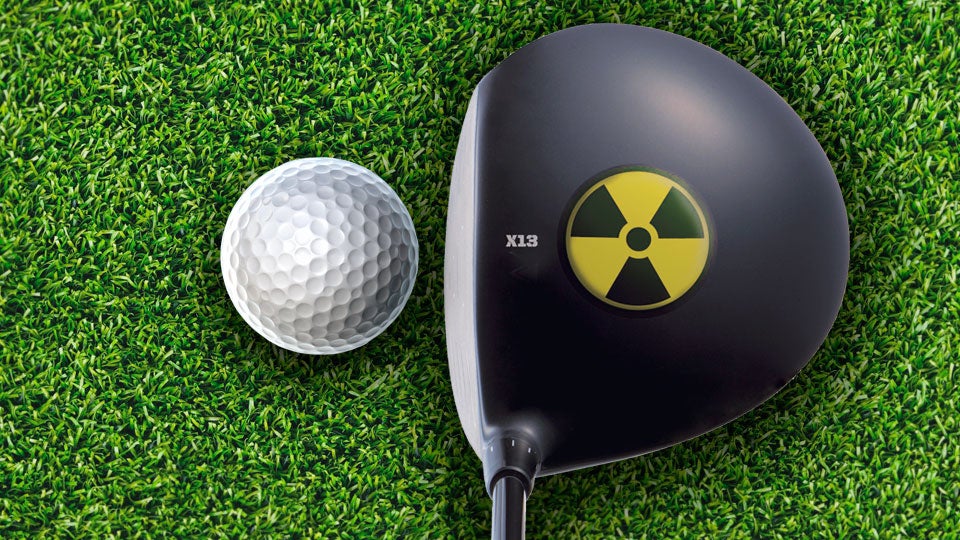 CARLSBAD, Calif. – Kaboom!Golf announced Monday the launch of its lightest, longest, most explosive driver yet, the X13 Nukester Pro. The upstart manufacturer has unlocked breakthroughs in distance and playability by inserting in the face of the 24-layer carbon clubhead tiny XPCs™, or Extreme Power Chambers, filled with helium (He) and astatine (At), a rare and highly radioactive chemical element.

The proprietary blend of carbon, helium and astatine, or CHeAt™ Technology, has allowed Kaboom! to construct an ultra-light and supremely springy driver that promises to deliver up to 100 more yards of distance for players with average swing speeds. The extra pop, however, does not come risk-free, given prolonged exposure to astatine can be lethal. Kaboom! executives don’t claim otherwise, but contend there still will be great demand for the driver.

“Ultimately golfers will need to make a decision about what’s more important to them: longer drives or a longer life,” said Kris Simons, Kaboom!’s founder and president. “Every consumer study that we’ve conducted assures us that they’ll choose longer drives.”

Assuming, that is, they can afford the Nukester. The driver will retail for $2,999, a big ask even for the most desperate and deep-pocketed golfers. Much of the cost is tied to the scarcity of astatine. Trace amounts of the chemical can be found in the decay of uranium and thorium, but Kaboom! engineers have discovered how to mass-produce astatine by bombarding an isotope of bismuth with alpha particles.

“It’s high-level stuff,” Simons said at a launch event on a Virgin Galactic space cruiser orbiting 50,000 feet above Earth. “Even I don’t really understand the ins and outs of the technology.”

Players control the release of astatine into the clubhead with a R4B™ (Ready4Blastoff) button on the butt of the grip. When the chemical mixes with helium in the power chambers, the club effectively becomes supercharged. This energy is transferred to the ball at impact, propelling it to heights and distances once thought unthinkable. In certain climatic conditions, catching the ball high on the clubface can cause the driver to literally explode—“like a rear-ended Pinto,” Simons said, laughing. “Though that’s unusual, like once in every 400 or 500 swings.”

In the endless quest for longer, more forgiving clubs, manufacturers have long experimented with different elements, from iron and titanium to zinc and tungsten, but Kaboom!’s use of astatine has raised eyebrows even among the most forward-thinking players in the equipment industry.

“You can absolutely kill this club,” says Harvey Hickox, an independent golf-equipment consultant whose SpankIt drivers shook up the golf world in the late-90s. “Unless it kills you first.”

Hickox said he took out the club for a test spin last month. He hit “a handful of drives over 400 yards,” but had a crippling headache after six holes. Hickox walked off the course after 14 holes, vomiting violently, and had an assistant pro drive him home. He said he didn’t feel himself for a week.

The Nukester comes in two head sizes, 460cc and 430cc, and with one of three stock shafts: the Power Pole 65Y, the SuperSlamStick 70, or the HammerHotRocket 100X. There are five loft options, ranging from 8 degrees to 14 degrees.

“But honestly none of that really matters,” Simons said. “Stiff flex or regular, 10 degrees or 12—our patented CHeAt™ Technology renders all of those specs moot. As I always say, ‘Just grip it and rip it. And then get the hell away from the driver.’ ”