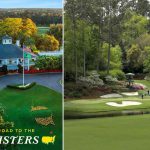 Augusta National is making a return to video games.

You may not ever get the chance to tee it up at Augusta National, but you may soon be able to play the course in the digital world.

Augusta National Chairman Fred Ridley announced in a press conference Wednesday that his club is partnering with EA Sports in the upcoming edition of EA Sports PGA Tour. The deal will feature Augusta National and the Masters Tournament with gameplay known as “Road to the Masters.”

“We believe the attention to detail surrounding the course and our traditions will be world class and will provide new and current fans around the globe with a fun and interactive way to look at Augusta National,” Ridley said.

With the Masters being featured in the game, players will now be able to compete at all four of golf’s major championships. Augusta National was first featured in a video game in 2011.

Ridley went on to say that all proceeds earned by Augusta National as a part of the deal will be contributed to “the Masters Tournament Foundation and our work to grow the game both here in the U.S. and around the world.”

EA Sports PGA Tour: Road to the Masters is scheduled for release ahead of the playing of the 2022 Masters Tournament.