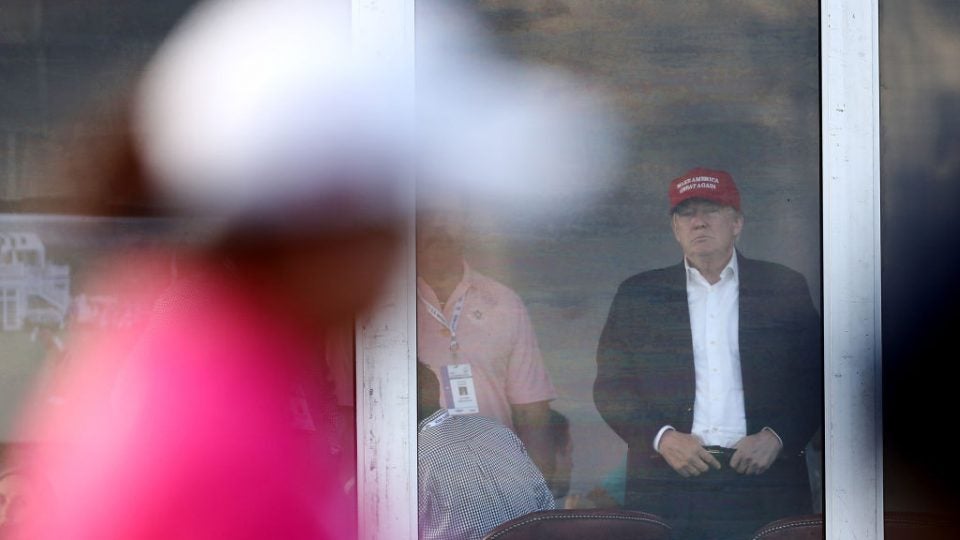 during the U.S. Women's Open round three on July 15, 2017 at Trump National Golf Club in Bedminster, New Jersey.

BEDMINSTER, N.J. (AP) — Shanshan Feng is going to have the president of the United States looking over her shoulder in the final round of the U.S. Women’s Open, and probably a lot of South Korean fans, too.

The 27-year-old from China rolled in a short birdie putt on the final hole Saturday to take a one-shot lead after three rounds of the biggest tournament in women’s golf.

Teenager Hye-Jin Choi and perennial Open bridesmaid Amy Yang were tied for second in an event where the South Koreans have shined.

The top six players chasing Feng are all from South Korea, and you have to go all the way to eighth place to find a U.S. player. That’s Cristie Kerr, who was five shots off the lead.

It should make for an interesting final day in a tournament that had an even bigger stage with Trump in attendance. He’s the first sitting president to attend a U.S. Women’s Open.

Feng shot a 1-under 71 to reach 9-under 207 at the president’s Trump National Golf Club.

“Coming to this week, I didn’t have any expectation at all,” said Feng, who has lead from the start after shooting a 66 in her quest for a second major. “I just – I wanted to bring out my ‘A’ game. And then I think I did really well for the first three days, and then I’m going to stick to my game plan. I just focus on my own game and let’s see what happens.”

Choi and Yang each shot 70.

Kerr, a former Open winner and a member at this course, was tied at 4 under with Spain’s Carlota Ciganda (72).

Feng had a one-shot lead after the first round and a two-shot margin at the halfway point, but she just could not hit it close in the third round. She had a couple of 10- to 15-footers for birdie on the back nine that never threatened the hole and she did not convert until hitting her third on the par-5 18th to about 5 feet.

Choi, the 17-year-old who is the world’s No.2 ranked amateur, might have been the most consistent player after bogeying her first hole. She birdied Nos. 8, 11 and 16 and just missed another on the final hole.

“I didn’t have the greatest start but I think if I just stay focused and play the game as maybe not necessarily play safe but maybe more aggressively I think I’m going to be OK,” Choi said through an interpreter.

Yang, who has four top-five finishes in the last five years including seconds in 2012 and ’15, had a roller-coaster round. She had five 5s, a bogey and a double bogey, which came on No. 3 after a bad shot out of a bunker.

Park played the back nine in 6 under. She led after 36 holes in this event last year and finished third, two shots out of a playoff.

“Yes, quite a few Korean players on the top leaderboard,” said Park, who said the course is similar to some in South Korea. “I think most of them, if not all, have strong capability to play really well.”

Playing with Feng, Jeongeun6 Lee had a crazy round that started with three straight bogeys. She added four birdies and two more bogeys in her final 15.

Ryu, the only two-time winner this year on the LPGA Tour, had three birdies after two early bogeys.

Mirim Lee had six birdies in the last 11 holes to get into contention.

Kerr had three birdies and bogey in the first six holes and then parred out the rest of the way.

“I feel pretty good,” Kerr said. “I’m going out there doing my thing and I’m trying to be in a good mental space where I’m not putting pressure on myself.”

With the arrival of the president Friday afternoon, security was stepped up Saturday. Dogs sniffed cars driven by players entering the course and fans and media had to walk through airport-type security checkpoints.

Outside the course, a small procession of cars and trucks circled the course and bore signs criticizing Trump and supporting women’s rights.

Trump spent the night in his house on the course and took the short drive from his residence to his box overlooking the 15th green, arriving around 2:35 p.m. Walking up the stairs, he yelled to the crowd asking them about the players’ scores.

Brooke Henderson of Canada was at 2 under, along with Christina Kim, who shot a 68 playing in the first group, and moved into a tie for 12th place.

Stacy Lewis, the former No.1 ranked women who has not won since 2014, played her first 10 holes in 5 under and moved within a shot of the lead heading to No. 11. However, she flubbed a couple of chips near the green and took a triple bogey. Her day ended miserable with a 10 on 18, leaving her at 2 over.

Defending champion Brittany Lang saw any chance of repeating end with an 8-over 80.

© 2017 The Associated Press. All rights reserved. This material may not be published, broadcast, rewritten or redistributed. Learn more about our Privacy Policy and Terms of Use.