Unearthing Erin Hills: Many questions loom over the rookie U.S. Open site. We visited in search of answers. 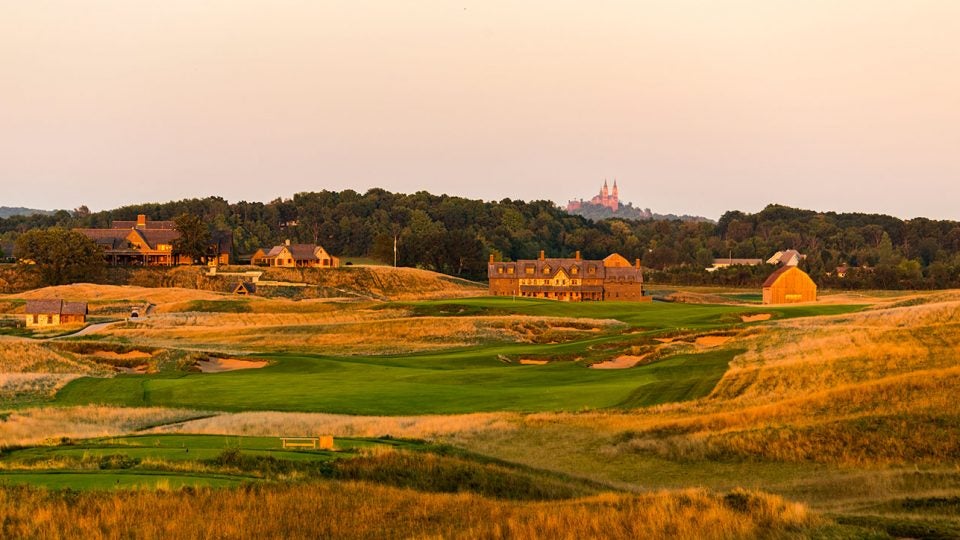 “If there’s no wind for four days, that would be highly unusual, but they’ll definitely shoot lower scores. These greens are so good. They’re going to make putts, and then you’ve got a par 72. But listen, at the end of it, contrary to what so many think, we’re not after a certain winning score. What we really are after is to see if we can set the golf course up in such a way that tests every aspect of the game.” – USGA executive director Mike Davis, speaking on Wednesday to the assembled media at Erin Hills

As a first-time major-championship venue, Erin Hills, in rural Erin, Wis., (population 4,525) presents a rumpled landscape of unknowns. No one is certain what scores the world’s best players will shoot when the U.S. Open arrives next month. It will be the first par-72 U.S. Open site since 1992 (Pebble Beach), and with four par-5s, Erin Hills could serve up birdies galore (assuming Mother Nature behaves). That Davis downplayed the importance of an even-par winner is telling – the 117th U.S. Open could turn out to be a rare shootout.

But that’s for another day. On Wednesday the international golf press was invited to central Wisconsin to check out the venue, chat up the architects and play a round on a track that over these final weeks will be nipped and tucked (and baked), all in an effort to provide golf’s ultimate test.

As the wind whipped up to 35 miles per hour, the course record (66) was not threatened by a media member.

I’ve yet to encounter a living soul who relishes a hole-by-hole recap from a 16-handicapper, so I’ll keep this part of my reporting brief: My group played a set of 6,750-yard tees, save for six holes where we moved forward to shave off about 300. I took 105 shots; most were uninspiring. I four-putted once, lost six balls in fescue, two more in marshland and one that I snapped into a remote maintenance pond, a noteworthy achievement when you consider that Erin Hills does not technically have a water hazard.

The USGA will once again use first- and second-cuts of rough off the fairways. Erin’s fescue is wispy and unpredictable. In some patches, you can easily find your ball; in others, it’s gone forever. Here’s a closer look.

For the most part, the course bludgeoned me — and just about everyone else, too — but I had three positive moments with a club in my hands: On the par-3 6th, I made a lucky birdie when my tee shot caught a good bounce off a slope. On the par-3 9th, Erin’s “signature” hole, I made par after stubbing my lag putt and summoning the grit of a champion to drain the remaining 10-footer.

On 18, I was about 20 yards behind and below the green in a spot my media partners dubbed “no man’s land” (Ron Whitten, one of the course’s designers, described this hollow as the place “where the U.S. Open will be lost”). But I pulled off the pitch of my life and drained the six-footer for a quadruple-bogey 9 that will resonate for generations. My caddie snapped a pic of my shot from the bottom of the slope. Trust me, it’s steeper than it looks.

My looper was a pleasant 26-year-old named Michael Flasch. Because the “c” in his last name is silent, he commonly goes by “Flash.” Flash works two jobs to feed his wife and two kids. He spent media-day morning digging a trench at a country club down the street, where he works on the grounds crew. Because Flash drew my bag, his afternoon was even tougher than his a.m. shift. Here’s a representation of his day:

Poor guy. For most of the round, I sent balls into patches of Wisconsin the pros will never see. But it was still a blast, and I’d love another crack at the course someday — from the forward tees.

Erin Hills was designed by a triumvirate of architects: Mike Hurdzan, Dana Fry and Whitten. It opened in 2004, played host to the 2008 U.S. Women’s Amateur Public Links and 2011 U.S. Amateur. The day before I played the course, I took a spin around the track with Hurdzan and Whitten. Hurdzan delivered a line that captures the type of players who will (or won’t) thrive here.

“We tried to make golfers think of every shot,” Whitten added. “It’s one of the most fun aspects of being an architect.”

Whitten’s day job is architecture editor at Golf Digest. He joined his two buddies to build a course on a special slice of property called Kettle Moraine, which was shaped by glacial movements. (We’re talking actual icebergs, not Kevin Na’s pre-shot routine.) The landscape is heaving and dramatic. I’ve never seen anything quite like it. It’s going to look fantastic on TV.

Here are seven other things I learned at media day:

1. The minimalist design concept is here to stay
Browned out, treeless courses became the rage after the critically acclaimed 2014 U.S. Open at Pinehurst. The USGA extended the trend at the ’15 Open at Chambers Bay outside Tacoma, Wash., and it continues this year at Erin Hills. Hurdzan, Fry and Whitten did not move much earth — glaciers did most of the carving for them — but the partners clashed over the number of trees to leave standing. In the end, most are gone, save for maybe a dozen old oaks with neatly clipped limbs that are beautiful but have no impact on a player’s strategy. “It’s not a treeless property, but there aren’t many trees out there, and the ones that are out there are probably nervous,” Davis joked. The minimalist approach creates some dramatic views of the landscape and simplifies maintenance. It also means that spectators hoping for shade should wear hats.

The USGA also plans to dry things out. The designers would like to see their course play firm and fast (read: brown), but there’s simply too much rainfall in central Wisconsin this time of year to get things crispy. The course won’t be as verdant as you see in my photos, but don’t expect a repeat of Chambers’ dusty landscape, either.

2. Goodbye, flat lies
Maybe wind isn’t Erin’s only defense. Because the architects tried to maintain the natural terrain, there aren’t many level stances out there. It’s another way the course keeps players on edge. And when they finally pull the trigger, the terrain will kick the ball in unpredictable ways.

“The fairways themselves are bouncy,” Davis said. “They’re predominantly fescue. There’s some ryegrass and some other grasses in there, but the soil or the subsoil here is a gritty, well-draining soil, so the combination of the grasses and the subsoil really do make this a bouncy course, so you’re going to see balls hit and move.”

3. Blind shots galore
“I’m big on hidden stuff,” Whitten said during our Tuesday tour. He was referring to Erin’s assortment of fairway bunkers that can’t be seen from a tee.

My favorite holes were 9, 12 and 17, where the challenge is all there in front of you. But the abundance of blind shots and hidden surprises were both frustrating and fun.

On the par-4 4th, what appears to be a gentle sliver of a fairway bunker is actually a cavernous death trap. At the par-3 6th, which history will forever remember as my birdie hole, the green is uphill, which obscures the lower half of the stick and most of the putting surface. Because of the undulating landscape, it’s easy on many holes to get out of position and become caught between a hill and the hole. “That does take some homework on the part of the players,” Davis said. “It takes some imagination, for all of us who are golfers, when you get a semi-blind shot. It takes a commitment to it because you can’t quite see where you’re going.

“That’s part of the beauty and the DNA of Erin Hills.”

4. The greens are pure
The USGA (rightly) caught flack for its Chambers Bay setup, where browned-out fescue grass on the putting surfaces caused putts to randomly wiggle and bounce. There will be no repeat at Erin Hills, where the greens are a hybrid bentgrass. On Wednesday they were perfect, and while they will ultimately play faster, the roll will remain true. Davis said he can’t remember entering an Open with better putting surfaces. And because of the superb conditioning, players will likely drain more putts, another indicator that scores here could be lower than at most U.S. Opens.

5. Bunkers are true hazards
In addition to the wind and the blind shots, the bunkers at Erin Hills are uniquely diabolical. The architects created more than 130 irregularly shaped hazards they dubbed “erosion bunkers,” which have wide spots and areas that are as narrow as a mere foot across. When players find the sand, they could have a clean look, or just as easily have no other option but a sideways pitch-out. Said Davis: “When you look at these things, there’s a lot of nooks and crannies where a ball could get where you’re uncomfortable, and I’m not sure I’ve seen a golf course where the bunkers have so many lies where you have a downhill high, an uphill high, a side-hill lie, and that in and of itself, when you’re in a bunker, even for a good player, makes it challenging.”

The traps on 9 and 15 are particularly brutal. “On 9, I wanted to see guys pucker,” said Whitten, presumably not referring to the tightening of a golfer’s face. “And on 15, we really experimented on how deep and how nasty we could make them.”

Here’s a better look at the hazards on 9 and 15. I recommend avoiding both.

6. It’s set up for a fun finish
Two par 3s, two par 4s and two par 5s comprise the closing six holes. No. 15 will likely to be set up as a drivable par 4 (flanked by those brutal bunkers). These holes will likely create wild swings up and down the leaderboard and, with any luck, an unforgettable ending. No. 18 is especially brutish, as the back tee can be pushed to an almost absurd 675 yards. From back there, the flagstick is nothing more than a rumor.

7. It’s a tough walk
Erin Hills checks in around six miles, but with all the slopes and undulations, plus steep strolls between holes, players are going to be wiped out. I’d wager that the winner will be a member of golf’s young and fit class. When I finished my round with wind-burned cheeks, aching calves and frayed nerves, Whitten was amused.

“It’s the Erin Hills look,” he quipped. “You’re going come off looking like you got beat up.”

Maybe Erin Hills won’t yield record low scores after all. In one month, the course will be ready for more than pretty pictures. It’s going to put up a fight.