Tony time: Live updates on Romo’s round at the Corales Puntacana Resort and Club Championship

Tony Romo is making his PGA Tour debut this week at the Corales Puntacana Resort and Club Championship in the Dominican Republic. You can follow along belong for live updates on his round, as the post will be updated throughout Romo’s day.

1:25 p.m. And it’s a par to finish for Romo, who makes a nice four-footer at the last. 5-over 77. Thanks for following along! You can read more about Romo’s day HERE.

1:03 p.m. Phewf! A green in regulation and a two-putt par. More good news: Guy Boros just posted a 7-over 79, which means Romo just needs bogey or better at the challenging 18th to avoid the cellar.

12:50 p.m. Romo ultimately found his tee shot on No. 16, but hit it heavy from the long stuff and went on to make bogey.

12:30 p.m. Oh dear. After bogey at No. 15 (just missed his par putt) it’s another block way right off the 16th tee. Romo is dangerously close to falling into the last-place cellar; Brian Davis, who finished at five over, currently occupies that position.

12:12 p.m. The wheels may be coming off. Romo just blasted his tee shot on 15 way right and will have trouble finding it. Hit the fairway with his provisional, though!

12:06 p.m. Too bad. Romo’s 4th shot was still from 147 out in the fairway and rolled off the left side of the green, leaving a pitch shot that Romo zoomed past the hole to the far fringe. He’s got two feet left for double bogey which will leave him at 3 over par.

12:01 p.m. After hitting 3 wood off the tee, Romo’s layup at the par 5 14th buried in the rough and he had to hack out. Going to need an up and down from the fairway for his par.

11:25 a.m. Nice use of the Texas wedge (that means his putter, plus he lives in Texas, so double points!) from below the green for Romo, and he putts it about two feet past the pin. Tap-in par at 12 and another nice up and down.

11:15 a.m. At the par 5 12th, Romo hits the fairway and lays up, but then just misses his wedge shot left and it rolls off the green. Meanwhile, on the broadcast…

Jim Nantz calls into Golf Channel broadcast, says he is “so stoked” about Romo: “I am living and dying with every shot here, and he is playing exceptionally well.”

10:59 a.m. And it’s another up-and-down for Romo at the par-3 11th. After hitting his tee shot long, Romo hit a nice low chip and knocked in his four-footer. Still even par.

10:45 a.m. Fairway, left his six iron short, hit a mediocre chip about 25 feet short and then nothing but net from there.

Andddd after a mediocre chip Romo walks in a 25-footer for par  this is wild https://t.co/Nt85m42h9a

10:34 a.m. Romo nearly chips in and cleans that up for an easy 3. He’s making the turn at even par, an impressive start by any expectations (although still six shots back of Brice Garnett, who is 6 under through 8).

10:18 a.m. It’s a birdie for Romo at No. 8! Wow. Who predicted three birdies through eight holes in like, a real live Tour event for Romo? Not me.

10:06 a.m. What should we be expecting from Tony Romo this week? I took a look at the prop bets set up at BetDSI earlier this week, and my bosses generously allotted me with an imaginary $1000 to invest in the week. Here’s what I settled on:

$50 on Romo’s highest score being higher than a 7

So from the sole perspective of wanting to be right, that’s what your Tony Tracker will be rooting for this week. But mostly I’m hoping Romo will take us through a little bit of everything on the golf course. So far, that’s certainly been the case.

10:03 a.m. It’s a disappointing three-putt bogey for Romo after hitting it over the par-5 7th in two. Back to earth, and to one over through seven.

Tony Romo goes DEEP! Back-to-back birdies get the former quarterback back to even par thru 6 @CoralesChamp. pic.twitter.com/3jDM7bDNOK

9:28 a.m. Another birdie! Good grief. Antonio Romo is back to even par through 5 holes and into a share of 35th place.

9:00 a.m. Okay, much better hole there: fairway, green, two-putt par for Romo, who is now two over through three holes. First par 5 of the day upcoming; let’s see if he can take advantage. No confidence from ESPN writer Jason Sobel, though:

8:46 a.m. Make that two bogeys in a row for Romo. It’s understandable that he’d have a slow start on Tour, but for the sake of Romo’s round (and the relevance of this post!) let’s hope he rights the ship. 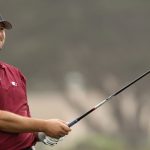 You may also like Tony Romo looking forward to PGA Tour debut: ‘You’ll get the best that I’ve got this week’