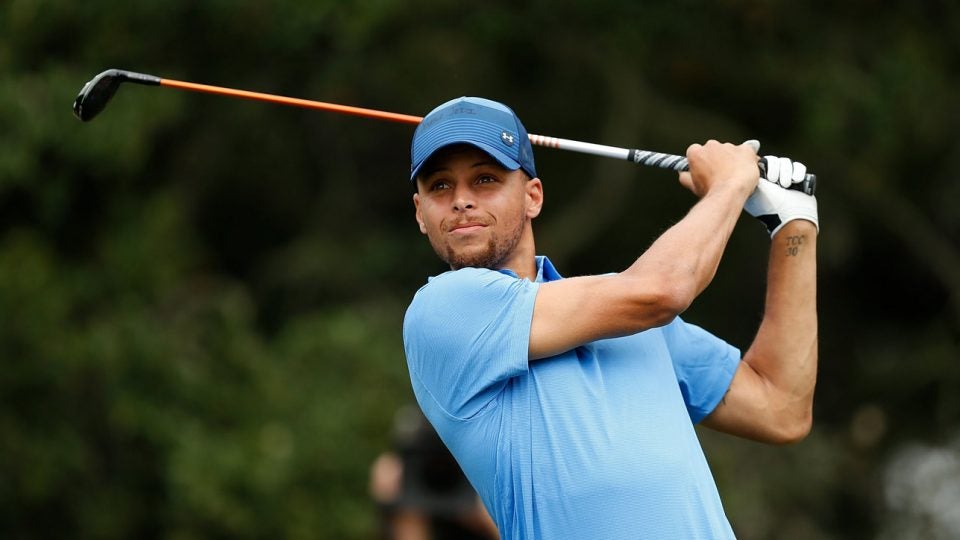 Stephen Curry may have missed the Ellie May Classic cut, but he impressed some of the Tour's best players with Web.com tour debut.
Lachlan Cunningham/Getty

HAYWARD, Calif. (AP) — Stephen Curry was certain to miss the cut against professional golfers one notch below the PGA Tour.

But not before leaving some of golf’s best players impressed that a two-time MVP for the Golden State Warriors could enter their arena and look respectable.

Curry opened with a 4-over 74 on the TPC Stonebrae and needed a career round to stay for the weekend. Instead, he shot 39 on the front nine Friday, and 34 on the back, for another 74. He was 8 over for the tournament.

“That was awesome what he did yesterday,” British Open champion Jordan Spieth said Friday at the Bridgestone Invitational. “I think he certainly beat most everybody’s expectations, but I don’t think that really surprised him. It was pretty cool – really cool – to see. You see him fist-pumping out there, and just him talking about how nervous he was when he heard his name called, it just makes us feel a little better when sometimes some of the stuff he does looks like a robot.”

One of the highlights for Curry in the opening round was a long birdie putt and telling his caddie to “Go get that” from the cup. That was the famous line Spieth said to his caddie at Royal Birkdale two weeks ago after a 50-foot eagle putt to take the lead.

“To be honest, I think it’s pretty special for a two-time MVP to be able to shoot 74 at a pro event and beat other pros,” former PGA champion Jason Day said.

The question in some corners was how high his score would be.

“I was asked if I thought he was going to break 80, and that’s the hand grenade question,” Paul Casey said. “But 4 over is really good. It’s a lot of pressure, and he exceeded my expectations.”

Zach Johnson, a two-time major champion, said he has a friend who knows Curry and said he was a good player. The score in the first round was enough to make a believer out of Johnson.

“Clearly, he is,” Johnson said. “I don’t know that golf course. Someone said they shoot pretty low there often, but it doesn’t matter. You’ve still got to put the ball in the hole. First round as an amateur in a professional tournament? That’s pretty good.”

Johnson vaguely recalled the time Jerry Rice, the Hall of Fame receiver for the San Francisco 49ers, played in the tournament. Rice shot 90.

“He’s a good athlete. They’re both good athletes,” Johnson said. “I’m not going to be playing for the 49ers.”