Report: Donald Trump is likely to attend the Presidents Cup on Sunday

According to reports from the Golf Channel, Donald Trump is expected to make an appearance at the Presidents Cup this weekend, probably on Sunday. “[Trump’s] people have been out and have taken a good hard look at the property. We’re thinking he is going to come out, but he hasn’t yet confirmed,” Jay Monahan, PGA Tour commissioner, said on Tuesday.

You may also like In the shadow of Lady Liberty, America’s golf stars largely avoid joining the political fray

Trump won’t be the only presidential spectator at the Presidents Cup this year: Barack Obama, George W. Bush and Bill Clinton will be in attendance on Thursday for the opening tee shot.

Trump caused a stir this summer when he visited Trump Bedminster, the golf club he owns in New Jersey, while it was hosting the U.S. Women’s Open. 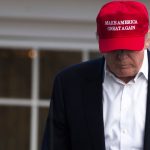 You may also like When Trump is finished with politics, look for him to return to golf in a big way

The last sitting president to attend the Presidents Cup was avid golfer Bill Clinton in 2000.