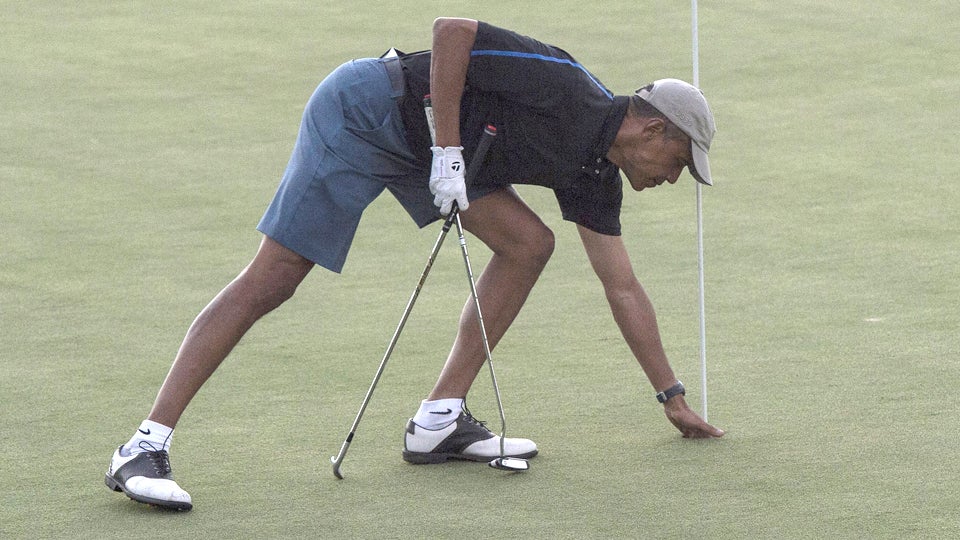 President Barack Obama retrieves his ball after putting on the 18th hole during a round at the Mid-Pacific Country Club in Kailua on Dec. 29, 2014.
NICHOLAS KAMM/AFP/Getty Images

The televised 2016 Democratic presidential nomination debate didn’t stop President Barack Obama from hitting the links during his vacation in Hawaii.

While Bernie Sanders, Hillary Clinton and Martin O’Malley duked it out on stage at St. Anselm College in Manchester, N. H., POTUS hit the course on the Marine Corps Base Hawaii in Kaneohe while First Lady Michelle Obama hiked the Makapuu Lighthouse Trail. The First Family vacations in Hawaii annually over the winter holidays.

The Commander in Chief played in a foursome with White House staffers Joe Paulsen and Mike Brush, as well as longtime friend from Honolulu, Bobby Titcomb, according to local news reports.

According to media pool notes distributed during the debate, President Obama returned to his Kailua vacation rental just before 5 p.m. local time, about halfway through the debate.

No word on whether he decided to skip the debate entirely, or watch it on record. Even the president needs a holiday break, right?