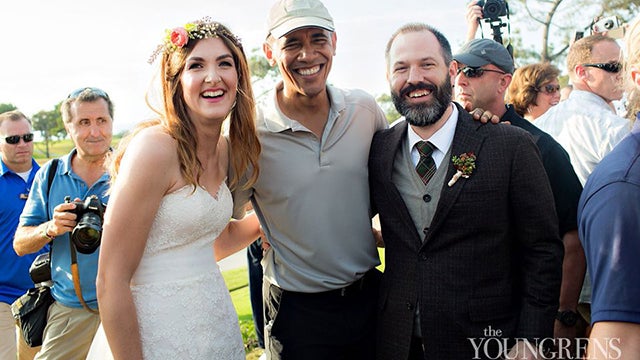 One couple is not complaining that President Barack Obama has played 256 rounds of golf during his presidency, especially since the most recent one took place at their wedding venue…on their wedding day.

Stephanie and Brian Tobe were about to say their vows on Sunday at the Lodge at Torrey Pines Golf Course in La Jolla, Calif., when their schedule was interrupted by the secret service and POTUS’ golf game. The President, who was in California for the weekend on business, decided to wrap his visit with a round at the famed course. It just so happened that the Tobes were preparing to marry at an altar that overlooked the 18th green at the same time. 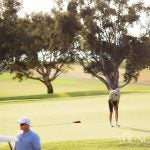 According to a blog post by the couple’s photographers, Erin and Jeff Youngren, the minor inconvenience of letting the president play through was nothing to the excitement they felt by being in his presence. And then, things got better.

“Jeff came over the radio in my earpiece and yelled, “We’re coming down with Brian and Stephanie!! Hold him if you can!!” (As if I have the power to hold a presidential party. What was happening??) Immediately, I switched lenses and starting asking secret service agents as they shoved down the line, “Can we please get a photo with the couple??? Can we please get a photo with the couple???” I yelled back into my earpiece, “You need to hurry or he’ll be gone!” Brian and Stephanie burst from the hotel, Stephanie sprinting in her navy blue Nina heels and Monique Lhullier gown, their friends and family bust into cheers at seeing them, and this is what happened.”

Obama shook hands with guests and posed for photos with the couple, apologizing for holding the ceremony up. And as per the photographer, POTUS gave the groom, who is also from Chicago, some marital advice. 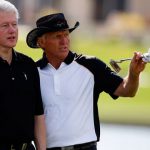 You may also like Bill Clinton: Give Barack Obama a Break, Golf Is Great for Presidents

“Nothing about this presidential drop-in negatively impacted the day,” Erin wrote. “In fact, the mood became so fun, laid back, and celebratory, that it was one of the most joyful weddings we’ve ever been at – ever. We easily made up the timeline with the cocktail hour, we were able to get better sunset photos, and in the end, things didn’t run late at all. It was a life moment that none of us will ever forget.”