President Donald Trump posts October round of 68, according to GHIN

UPDATE: The White House denied that Donald Trump posted the 68 to his own GHIN page, according to the Wall Street Journal. They would not confirm whether or not the score was real, and where it might have occurred.

If you thought President Donald Trump’s now-famous round of 73 with Sen. Lindsey Graham was pretty good, wait until you hear what he did next.

According to his GHIN page, the president posted a round of 68 in October of this year, by far the lowest score listed on his handicap report (h/t The Hill). The 68 is also the only round Trump has posted since he became president, and it dropped his handicap index to a 2.5 as of Nov. 1.

When it comes to further specifics about the round, details are murky.

Here’s what we do know: The score was posted in October. We know Trump played with Sen. Rand Paul on Oct. 15, and with Sen. Graham Oct. 14. That much-analyzed round of 73 was played the week before, on Oct 9. Each of those rounds was played at Trump National Golf Club in Virginia.

The round of 68 is listed as an “away” round, suggesting it wasn’t played at one of the president’s home courses. The course rating is also oddly low — 66.1 — a far cry from the ratings and tee boxes Trump normally favors, which range from the low- to mid-70s. 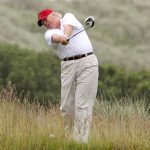 You may also like ‘He hit the ball on the screws’: Sen. Graham details President Trump’s improbable 73

As is often the case with President Trump, the story raises far more questions than answers. Where and when was this round of 68 played? Why did he choose to post this score, and no others since June 2016?

One thing is certain: With scores like these, President Trump’s handicap isn’t going up any time soon.

You may also like The Trump Tapes: Two very different ways to interpret video of the president scraping up a putt