How New PGA Tour Commissioner Monahan Differs From the Rest 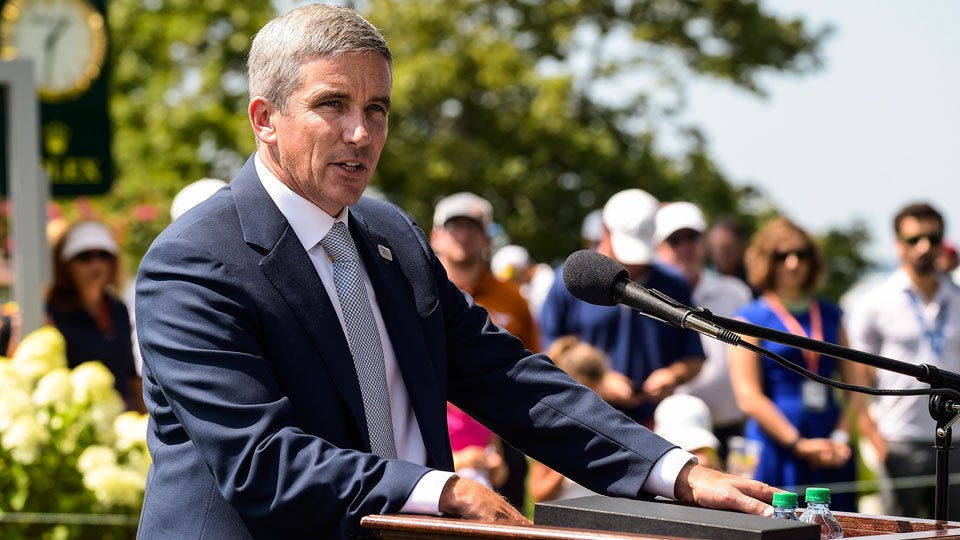 Jay Monahan, a longtime consigliere to outgoing commissioner Tim Finchem, is the most approachable of the four men who have served as the commissioner of the PGA Tour. Monahan, who is 46, has the affable demeanor of a natural salesman, something that the first three commissioners — Joe Dey, Deane Beman and Finchem — did not have at all. That trait will be useful, because among the many tasks a golf commissioner faces, selling the Tour — to sponsors and network executives in particular — requires a great deal of sales skill. Now more than ever.

He is steeped in the game, and that will serve him well. He comes from a golfing family and played at Trinity College in Hartford. He loves the game. Dey was a longtime USGA executive and Deane Beman was a noted amateur and Tour player. Finchem did not have a notable enthusiasm for the game or its playing. It is always easier to sell something you love.

Monahan also has an excellent relationship with Mark Steinberg, Tiger Woods’s agent, and by extension, Woods himself. Monahan’s first fulltime job in golf was in 2002 as the tournament director of the Deutsche Bank Championship, the Boston Tour stop that is a fundraiser for the Tiger Woods Foundation and is now part of the FedEx playoff series. Later, he was the executive director of the Players Championship. Years earlier, he worked as a player agent, representing, among others, Brad Faxon.

(Tour Confidential: How Should Jay Monahan Manage the Tour as New Commissioner?)

Being a tournament director is almost like being the commissioner for a single event. You see every single aspect of how a tournament is played — including the experience for fans, the selling of hospitality tents, the distribution of range balls — and your power comes from your ability to get along with people, not from handing down orders. In a very real sense, Tour “commissioner” is a misnomer. The position comes with broad powers in certain narrow areas but in other ways being the commissioner is more like being the executive director of a chamber of commerce.

Like Faxon, Monahan is a New Englander to the bone, a Red Sox fan who worked for the American League team prior to joining the Tour. One of the first challenges facing Monahan will to negotiate television rights for Tour events. As more and more people cut the cord with their cable providers, the Tour will undoubtedly explore the possibility of creating its own network which would be accessible through different platforms, including one’s phone and tablet. There is nothing in Monahan’s background to suggest he has expertise in this most crucial of marketing decisions for the Tour, but that doesn’t mean he won’t be thinking about novel ways to approach the question. He will also likely bring in a deputy who does have expertise in the fast-changing world of how the public watches sporting events.

Monahan has a broad constituency — to use a word in the air today — and the ability to get along with every part of it.