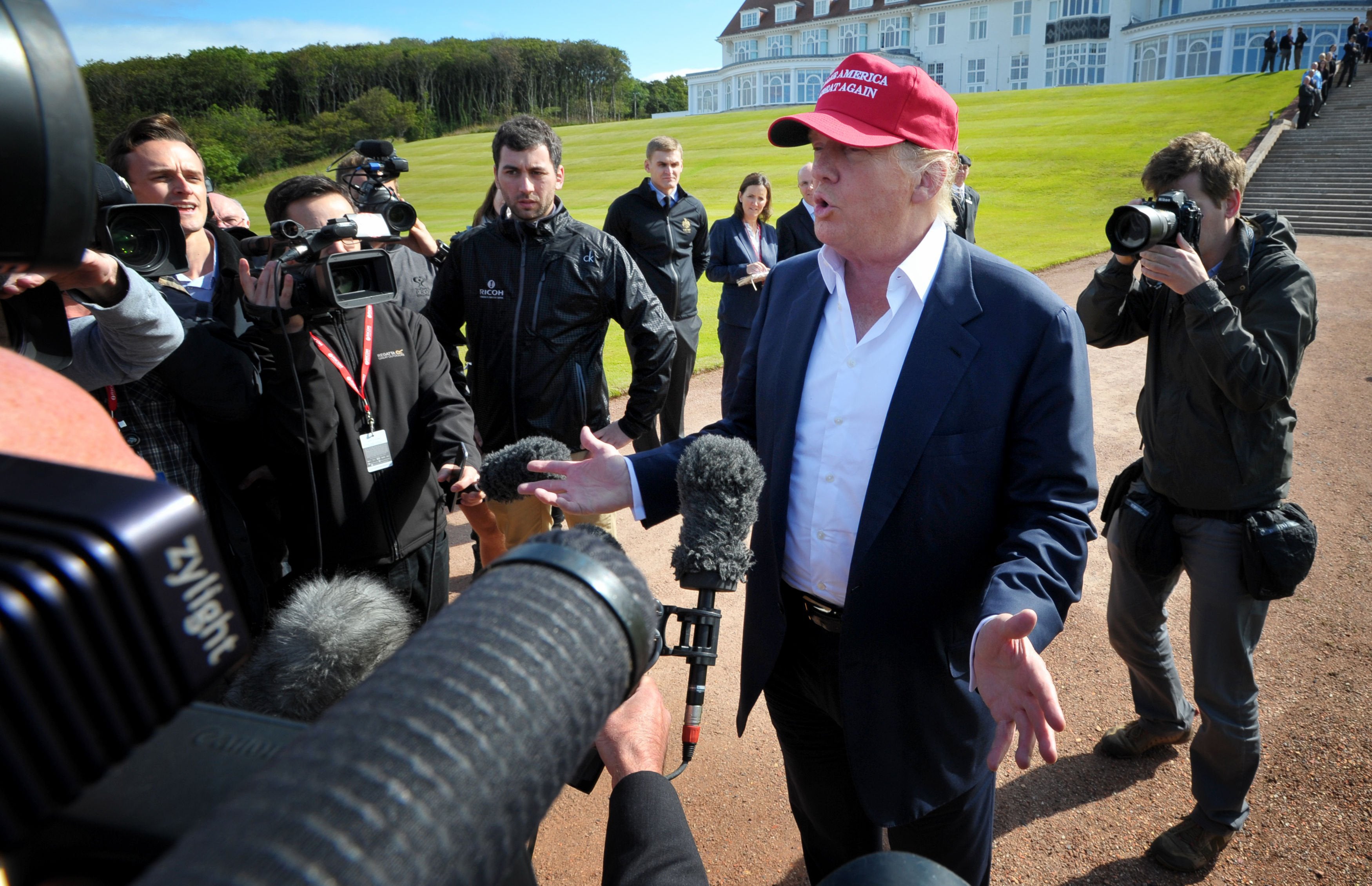 Donald Trump speaks to the media after arriving by helicopter at his Trump Turnberry golf course in Ayrshire, which is hosting the Ricoh Women's British Open.
JANE BARLOW/PA PHOTOS /LANDOV

Donald Trump is at the RICOH Women’s British Open this week because, as he says, “The world asked me to be here.”

The fourth of five majors in the LPGA season, the Women’s British Open found itself in the middle of the Trump media frenzy a few weeks ago, when Trump ‘offered’ to relieve the LPGA of their obligation to hold the Open at Turnberry two weeks before the event. That frenzy still hasn’t died down as the billionaire presidential hopeful made his entrance at Trump Turnberry, his chopper touching down on the lawn of the hotel to live bagpipers.

The storylines for the Open include Lydia Ko firing a career-low round in a major – a 6-under 66 – Inbee Park chasing a career grand slam and Michelle Wie returning from injury. Golf reporter Ron Sirak published the press conference information handed out to accredited media, which said, “Donald Trump will make himself available to meet the Championship’s accredited media at 1.30pm on Thursday, 30th July. We will confirm where this meeting will take place tomorrow morning. Questions must be restricted to the subjects golf, Turnberry and the tournament.”

Questions instead were focused on Trump, his presidency, and his controversial remarks regarding Mexican immigrants. Reporters hurled questions at him, from “Why are you here?” and “Are you detracting from the event?” to “Are you racist?”

Trump on why he’s here: “Because I love Turnberry & we have the Women’s British Open. It’s going to be exciting.”

Trumps recent controversial remarks regarding Mexican immigrants have been at the forefront of Trump’s media coverage, especially as they relate to golf courses and personnel.

‘I am number one in all the polls. I expect to win the presidency. The Hispanics will vote me’ Trump.

“Illegal immigration is a huge subject,” said Trump, speaking to the press from the steps of the Turnberry hotel. “I brought it to the fore and everybody is thanking me for it.

Trump, who is leading Republican nomination polls with 20 percent of the vote, said he was elated about the most recent results.

I would get along with Vladimir Putin, says Donald Trump

“I expect to be president,” he told reporters.

Wie said earlier this week that she thought Trump’s presence at Turnberry would distract from the competition. Most LPGA players deflected questions about Trump’s politics, electing to focus on the task ahead: bringing home a major tournament win.