In 2015, oddsmakers put Charles Barkley at 5000-1 odds to win the American Century Championship, a celebrity golf tournament in Tahoe. This year his odds are even larger than that, at 6000-1. According to ESPN, so far no bettor has taken the bet.​ Back in 2015, Hank Haney chimed in on Barkley’s plight in the annual tournament, where he’s finished in last place five times out of 21. “I think the bookmakers are safe no matter what the odds are with Charles. It’s not going to happen,” he said.

Then last year, Barkley followed suit by finishing last and not making a single par in two rounds. Want to bet on an entrant with better odds than Barkley, whose swing struggles are infamous? Try Steph Curry (20-1), Tony Romo (3-1) or Justin Timberlake (35-1). 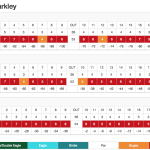 You may also like Charles Barkley Finishes Last, Again, at American Century Championship