Rules Guy: How do you handle a *living* obstruction? 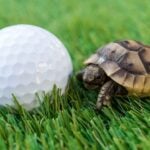 What do you do if you encounter a living obstruction when you approach your ball?

I hit my ball about five feet from the edge of the woods. As I was about to play my shot, I noticed a living obstruction — a box turtle with his head sticking out from his shell inspecting the ball. I could have hit the ball if it retracted its head, but it hadn’t after about a minute he and my playing partners and I were befuddled.
—Joe Phillips, Hampton, Georgia

Unless this were, say, a vicious snapping turtle, which might fall under Rule 16.2, “Dangerous Animal Condition,” you don’t get free relief.

The best option might be to pick up the turtle gently and carefully and move it out of the way. (You could mark and re-place it after your stroke if so inclined.) Or you could politely encourage the turtle to move, if you have any turtle-whispering skills.

What you can’t do is unreasonably delay play; golfers must be more hare than turtle. Either play the ball as it lies or take a penalty stroke for an unplayable and move two club-lengths, which should at least earn you free membership into the Sierra Club.

For more obstruction guidance from our guru, read on …

In a tournament, I found myself in the left trees on a par 5. In my line of play (though not impacting my swing) was a metal plaque the size of loose-leaf paper on an immovable four-foot-tall post. My opponent allowed me a drop to the nearest point no closer to the hole that would take the plaque out of my line of play and sight … but he added that I needed to hit the same shot I’d planned prior to the drop. I thought after getting relief I could choose whatever shot I wanted, even if, due to a better window, it meant a full 3-wood instead of a punch-out. Who was correct? Or were we both wrong?
—Drew Haley, Bethesda, Md.

If your opponent told you to take a free drop off the Brooklyn Bridge …. You were indeed both wrong, because you weren’t entitled to free relief, as the immovable obstruction interfered only with your line of sight, not your swing, lie or stance.

The question becomes whether this was match play or stroke play (in which case you meant “fellow competitor,” not “opponent”).

In match play, you’re off the hook because, per Rule 20.1(b)1, if a player and opponent agree to a procedure, correct or incorrect, it stands, as long as they’re not knowingly waiving a Rule. In stroke play, you breached Rule 9.4 and get the penalty of two strokes for playing from the wrong place.

Oh, and if a competitor ever tries to tell you what kind of shot to play, tell him to jump off the Brooklyn Bridge.