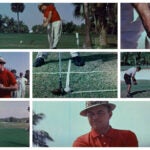 Golf legend Sam Snead featured in a recently-unearthed instruction video from the 1960s.

I’m not exactly sure how or why I came across this video, but I noticed on YouTube recently that some blessed golf scholar uploaded a rare old video featuring Sam Snead. It’s from the 1960s, and it’s a nine-minute short film as the golf legend makes his way around Boca Raton, Florida. It’s a delightful jaunt through the ’60s, in a style that Don Draper would’ve been proud of, and better yet, it’s packed with a series of helpful tips about how to play better golf.

Here are my favorites — including what Snead says is the “secret” to power. The full video for your to enjoyment is at the bottom of the page.

1. Push the club with your lead arm

Snead’s secret to power comes is one tip with three parts.

First, the narrator explains that Snead’s secret to hitting the ball far is to feel a “relaxed” and free-turning backswing where golfers feel like they push the club away using their lead arm on the takeaway. Stay loose, and push with your lead arm.

2. Pull the club down

Then, as it’s time to begin the downswing, Snead feels like he pulls the club down towards the ball. You used your left arm to push the club away, now he wants you to use it to pull the club down.

3. Turn your body for the final “punch”

It’s only around impact, Snead says, that he feels like he stops making an arm swing and starts using his body to rotate. As you can see, that’s not what’s actually happening — his body is constantly rotating — but nevertheless, that’s his feeling. That the first half of his downswing is a pull with his arms, and the final part of his downswing is a rotation with his body. It’s the “final punch,” as the narrator describes it.

But the video was full of other clues to Snead’s distance keys. And, indeed, many of them relate to the three-step move above. These are a few of the other tips he shared…

4. Grip is the “most important” thing in golf

I’ve said it before and I’ll say it again: The biggest difference between amateur golfers and professionals is that pros care far more about their fundamentals, because they understand how important they are. The same was true in the 1960s, apparently, because right on cue the first tip Snead shares is about the grip. He says it’s the “most important” thing in golf, and endorses an overlapping grip where the hands fit snugly together (If you want to give your own grip a quick check, here’s a helpful tip).

The reason why Snead thinks the grip is so important is because he says it’s a golfer’s lead arm which controls the clubface — but an incorrect grip can disrupt that lead arm and clubface relationship. Snead demonstrates this via a cameo with former world heavyweight champion Rocky Marciano. In a schtick-turned-golf-tip, he puts boxing gloves on Marciano and has him hit a ball as a way of illustrating the lead arm’s relationship with the clubface. But in order to make sure it all works properly, you need a good grip, Snead says.

A more controversial tip nowadays among many teachers, but Snead swore by it: Keep your head still! That’s not the same as keeping your head down (which teachers agree is terrible advice), but Snead says that golfers should always keep their head still on the backswing to help them hit the ball.

At one point in the video Snead quickly ran through some fundamentals for ball position. It’s simple enough and you’ve probably heard them before, but remember what I said earlier: Pros really care about the fundamentals, so let’s review what Snead says.

With the driver, Snead wants your toes flared slightly with the ball lined-up with your left heel.

8. “Near” left heel with longer irons

With your longer irons, he says the ball should line up “towards” your lead heel but not in line with it. Interestingly, he also suggests closing your stance slightly, which will help you swing more in-to-out and sweep the ball off the turf.

With shorter clubs, it’s the opposite. Narrow your stance, stand closer, play the ball towards the middle and open your stance slightly. It’s a tip that was more common in the past than it is now, but it’s a good one: It helps you hit down onto the ball more, and generate more spin.

10. Hit the sand with the club

And when you’re in the bunker, Snead says to keep it simple: Dig your feet into the sand to test the texture of the sand, open your clubface, and then focus on hitting the sand directly behind your golf ball. Remember that it’s the sand that your club will come into contact with, Snead says, not the golf ball.

Want to pick up easy yards? Get a driver fitting from the experts at our sister company, True Spec Golf.