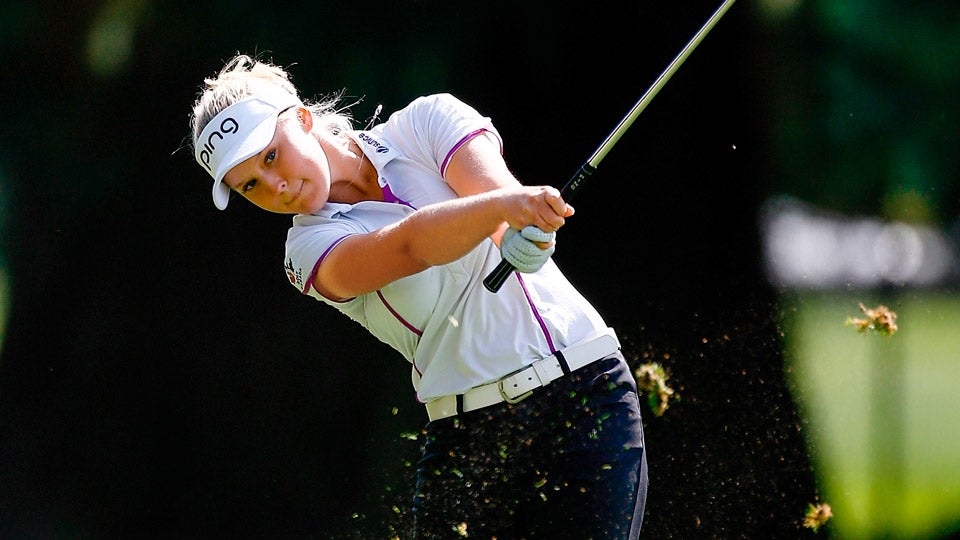 1. ROLL WITH THE PUNCHES

Notice the position of the clubhead — the toe has rotated well past the heel. Releasing the club like this through impact gives you maximum power and speed, in addition to a little draw spin. Be like Brooke — roll your right forearm and wrist over their left-side counterparts through the hitting zone and beyond.

Brooke’s eyes help her hit approach shots that never leave the flag. After visualizing the shape she wants in her pre-shot routine, she locks onto the ball as she settles into her stance. Then, as seen here, she stays focused on the ball well after impact, rotating her head in sync with her swing so her eyes can “chase” the ball down the fairway. This subtle move makes it easy to fully finish your swing.

She typically chokes down an inch or two on the club; it’s how she controls it from start to finish. Give it a try — a “shorter” iron is easier to manage. Also, copy the way she wraps her right forefinger around the handle. This simple tweak stabilizes the club through the hitting zone, letting you squeeze every yard possible out of the speed you created.

Brooke’s swing stands out — she rotates like crazy but with both feet planted in the turf. Maintaining your connection to the ground sends power up from your shoes to your arms, hands and the clubhead. So stop lifting or rolling your heels through impact. “Quiet” footwork will make a loud noise on your card.

Henderson’s GIR percentage on the 2016 LPGA Tour, good for eighth. During the final round of the LPGA Championship, she missed only four greens. At 18, she became the second-youngest major winner ever.