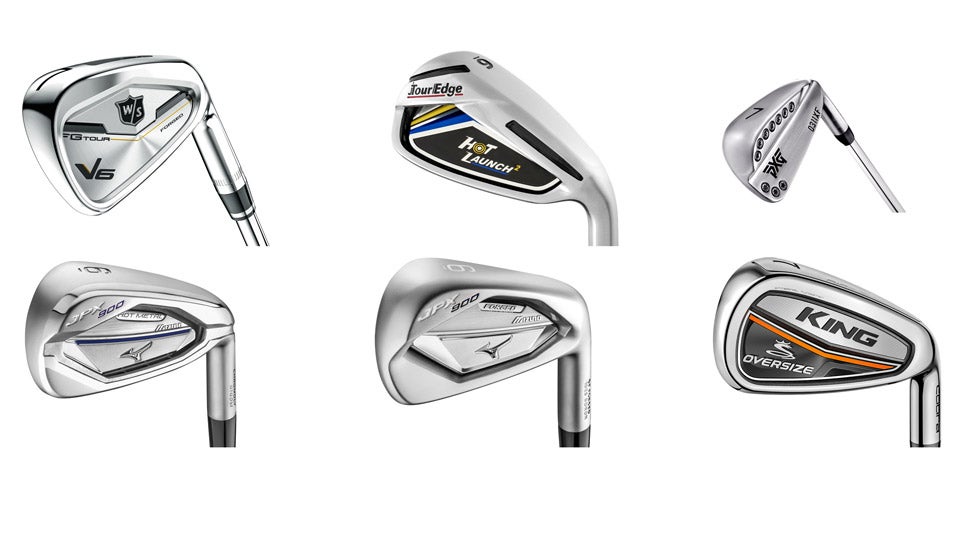 These six new iron models can give you a little extra help on mis-hits.

Size does matter, at least on this hollow-bodied distance iron meant for bogey golfers. A thin, L-shaped 17-4 stainless steel face provides the power and a very generous hitting area — 12 percent larger than the King F6 iron. In addition, a 70-gram tungsten weight low and toward the toe boosts MOI and lowers the center of gravity to send shots skyward. The tungsten positions the CG directly behind the middle of the face, so center hits are rewarded with precise results. In stores November 4.

The JPX 900 Forged borrows several features from its predecessor, the JPX 850 Forged. The boron-reinforced carbon steel head allows for a thin face and a deep cavity, the “PowerFrame” design pushes mass to the corners to ease misses, and a CNC-milled pocket frees up the face to flex more on low hits. What’s new? The pocket cavity is wider and lower from heel to toe than before, which moves more weight to the perimeter and increases ball speed on thin shots. The head size changed, too — the 4- and 5-irons are slightly longer to increase forgiveness, while the scoring irons are slimmer for added workability.

The biggest, hottest, most forgiving iron in the JPX 900 family is made from a strong, malleable chromium alloy (used in aircraft tubing and race car roll cages) with a lively cup face.

The company’s testing shows it produces 2 mph faster ball speeds than the 17-4 stainless steel JPX 850 it replaces, with a larger COR area to minimize distance loss on misses. The 4- to 8-iron lofts are 1° stronger, but shots fly marginally higher with a steeper descent. Plus, the “Power Frame” increases MOI, the sole helps with turf interaction, and a reinforced topline controls sound and feel.

Can more money buy better shots? PXG thinks so. The game-improvement 0311XF has a longer blade and a wider sole than the standard 0311 for more forgiveness on mis-hits and a higher launch. Like its brethren, the satin chrome XF features a forged carbon steel body with a thin, high-strength steel face. The elastomer-filled head supports the face and minimizes impact vibration. The PXG calling card — tungsten-alloy weights along the perimeter of the head — further aids forgiveness and launch. The XF blends with the 0311 blade and 0311T models for players who prefer a mixed set that provides more help in the long irons with the precision of bladelike short irons. The irons also come in a black finish, for an extra $150 per club.

Here’s an iron for those who want some benefits of modern technology at a more affordable price than, say, the company’s Exotics line. The second-generation Hot Launch, made from 431-stainless steel, has a variable thickness face to help distance on off-center hits. It’s paired with an undercut cavity that moves weight away from the face to increase MOI. Meanwhile, a cutout in the hosel on the 4- to 7-irons frees up mass that gets repositioned toward the toe for added stability. The irons can be customized for loft, lie, length and grip size at no cost.

Wilson’s designers worked from the FG Tour V4 to develop a more playable iron. For instance, making the topline thinner means two more grams can be moved into the tungsten sole weights to lower the club’s CG. Plus, the long irons (3-5) in the forged carbon steel FG Tour V6 have two tungsten plugs (12 grams near the toe and 8 grams near the heel) to improve head stability at impact. A single plug is centered on the bottom of the 6- and 7-irons to maintain workability. The V6 is tailored to better players so plenty of mass sits behind the center to preserve impact feel. In stores January 9, 2017.