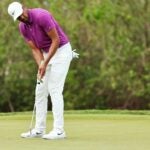 Tony Finau's new putter is designed to help him cut down on missed putts to the left.

Tony Finau‘s putter blew up during the first round of the Mayakoba Golf Classic. Not in the literal sense, mind you. On social media, numerous gearheads picked up on the odd-looking putter designed by Texas-based Piretti Golf that featured a hosel location you almost never see in the professional ranks.

What was Finau trying to accomplish with his new wand? According to Michael Johnson, Piretti Golf’s founder, the prototype putter was created back in August to help eliminate a common miss Finau had been struggling with in recent months.

“We came up with it to help [Tony] miss less putts left,” Johnson told GOLF.com. “That’s always his miss on right to left putts. It also helps so he doesn’t feel like he has to forward press like he has to this point.”

Finau’s previous Piretti Matera Elite putter featured 4 degrees of loft to help counteract the forward press the Tour winner would impart on the blade, which took the dynamic loft — better known as the loft at impact — to anywhere from 1 to 2 degrees.

To achieve a more consistent dynamic loft, Finau and Johnson kicked around a few ideas before landing on a one-off creation where the shaft entry point was welded to the back flange of a Matera Elite head to give the putter one ball of onset.

If the distinctive design looks familiar, it’s because several manufacturers — most notable Odyssey’s Backstryke — have offered something similar in the past to help keep the face of the putter in front of the shaft at address and through the stroke.

“It took us some time [to design the putter and weld the shaft in place],” Johnson said. “[Tony’s] a very intelligent golfer and knows what he wants to feel so we go off of that. He explained to me what he wanted to feel and this is what I came up with.”

With the new shaft location, Finau went down to 2.5 degrees of loft on the 36-inch putter. The goal behind the design is finding a way for Finau to keep loft consistent throughout the stroke without having to impart a significant forward press, which in turn could alter face angle at impact.

Finau had been working with the putter at home since August, but with the year winding down, he figured Mayakoba was a good opportunity to see if the custom putter could produce in a competitive setting. So far, the putter appears to be working. At the time of posting, Finau was T3 in putts per GIR and near the top of the leaderboard.

As for the possibility of Finau’s putter coming to retail, Johnson left the door slightly ajar. “Doubt we release this, but you never know,” he said.