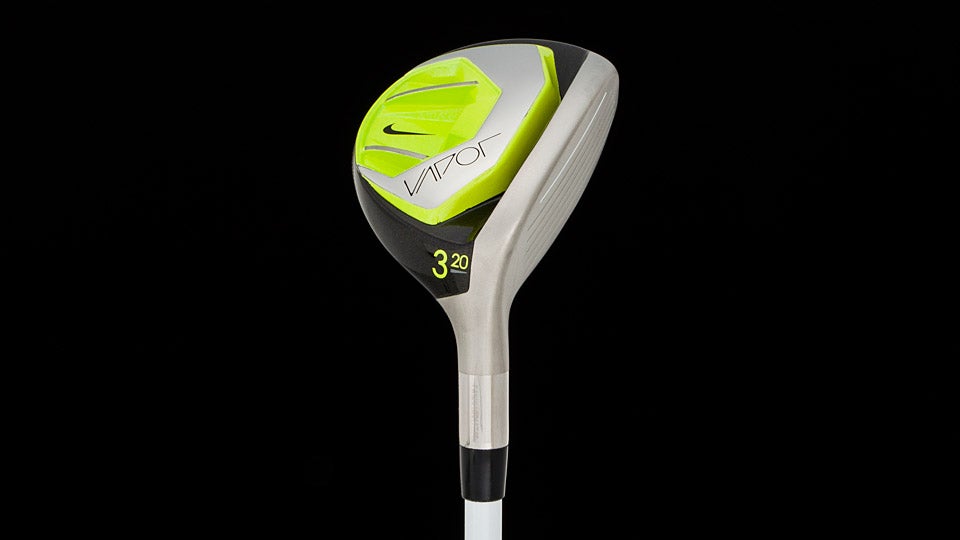 PLAYABILITY: The Vapor Speed is a simple club to use—to amend Nike’s old motto, “Just Do It—and Don’t Overthink It”; a fairly nimble hybrid that works well from turf and tee alike; sole slides through all kinds of scary lies without the urge to dig in.
ACCURACY/FORGIVENESS: Straighter than most—scrubs sidespin well and holds the line with no trouble; doesn’t take much to get the ball going where you want it to; seems to have a wide sweet spot—minor misses are indistinguishable from dead-center strikes.
DISTANCE: Solid distance—with the right set makeup, certainly not an issue; this hybrid trades some carry for roll—shots do a lot of work after touchdown; doesn’t seem to lose much from the rough.
FEEL: The Vapor Speed is a sweet-swinging hybrid; the “Speed” moniker feels apt—light in the hands and fast through the ball; for a loud-looking club, surprisingly reserved at impact—expect a crisp, succinct click with a subtle nudge on misses; most guys are into the cushioned Tour Wrap grip.
LOOK: If we’re calling other hybrids “modern,” then Nike sent this one back in a time machine; rave-ready neon color scheme will certainly start (or end) conversations, but it looks like the company’s tech team has your back; silver along the topline successfully implies “iron” at address. Some guys struggle to find a prevailing shot shape or ball flight; several panelists lose too much distance on toe and heel contact; for some testers, the bright yellow logo on the crown detracts from the overall package.

BOTTOM LINE: The Vapor Speed hybrid is easy enough to put in play. The tech-heavy design might appeal to club geeks with a futuristic bent.

BUY THE CLUB: Get your own Nike Vapor Speed hybrid

The Vapor Speed hybrids are aimed at players primarily looking for ballspeed, distance, and forgiveness. Built with a unique “linear progression,” design, the longer models in the line feature a larger clubhead and shallower face while the shorter clubs features smaller heads with deeper faces. The result is more forgiveness and distance in the long clubs and more accuracy and precision in the short clubs. The Vapor Speed hybrids also feature the same reinforced cavity back and compression channel technologies as the Flex hybrids. The Vapor Speed hybrids will be available in 17°, 20°, 23°, and 26° models with Mitsubishi Fubuki Z 70 shaft.

“The Vapor Speed hybrids are engineered for speed, increased trajectory and forgiveness,” said Radcliffe. “Athletes looking to maximize and control trajectory from a variety of lies will benefit from the powerful combination of these signature technologies.” — Michael Chwasky