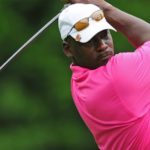 NBA legend Michael Jordan, most notably of the Chicago Bulls, is arguably the greatest basketball player of all time (quiet down Lebron James fans, this is a golf article). Jordan is also an obsessive golfer, known for his legendary on-course gambling and questionable golf attire.

During the first installment of “The Last Dance,” which is a 10-part documentary series highlighting Jordan’s sixth and final NBA Championship-winning season, I noticed that Jordan was using a Ping Anser putter in a golf montage. That got me wondering; what other golf clubs has Jordan used throughout his storied golf career?

So, I took to Getty Images and went through years-worth of photos. I noticed that Jordan has played a number of different brands during his golf career, including Wilson, Ping, TaylorMade, Callaway, Nike, Bettinardi, Scotty Cameron, Odyssey and surely more.

I also noticed that Jordan has played some of the coolest custom clubs, and has used breathtakingly awesome golf bags. Below are 7 gear highlights from among the thousands of great Jordan golf photos.

Obviously, Jordan is a big fan of red, the same color as the jerseys that the Chicago Bulls wore during away games. In the photo above, he’s using what looks to be an ultra-custom TaylorMade R1 driver painted completely red.

One of Jordan’s many lucrative endorsement deals includes Wilson, which makes golf gear as well as basketballs. This Wilson-made, Chicago Bulls/Michael Jordan staff bag is one of the coolest staff bags I’ve ever seen. I say that, of course, with the utmost respect for the classic Tiger Woods-Buick collaboration bag.

Jordan has a lot of gold in his life. He has six NBA Finals MVP trophies, which are gold, six NBA Championship trophies, which are also gold, and this custom golf driver that’s dripping in gold. When you have as many trophies as Jordan does, you can pull this off.

Judging from the golf photos of Jordan, he’s not afraid to switch putters often. This custom Scotty Cameron Bulls Eye blade putter is one of the standouts, being that it has his initials “M.J.” stamped on the toe portion of the face.

Jordan shoe collectors may actually lose their minds over this one. This red-and-black Jordan staff bag has numerous Jordan sneaker models stitched into it. As you can also see, Jordan was bagging a set of Ping S58 irons at this time.

Obviously, Jordan has huge hands, evidenced by the ease of which he palms an NBA-sized basketball. As such, he has huge grips… HUGE grips. What are there, like 23 wraps under those things?