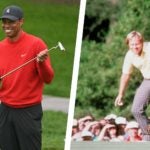 Tiger Woods' and Jack Nicklaus' historic putters would each likely net seven figures in an auction.

Name a golfy collectors item — chances are Golden Age Auctions has sold it.

The auction house (previously known as Green Jacket Auctions) is a bastion in the golf auction business. Its two co-founders have helped collectors trade on green jackets, Masters trophies, Claret Jugs, even Tiger Woods’ irons from his epic Tiger Slam.

15 years worth of surprising buyers (and themselves) has led them to some interesting results (like Michael Jordan’s golf clubs receiving as many pageviews as Sam Snead’s 1949 Masters Trophy), but what would their fantasy auction look like? Co-founder Ryan Carey joined The Drop Zone this week to break down that exact topic. It all starts with Tiger Woods’ trusty putter …

Listen to the Drop Zone wherever you consume your podcasts: iTunes | Spotify | Stitcher | PodBean

How glorious would that item be at auction? Tiger’s magic wand. His golden gun. The flatstick to end all flatsticks. Tiger Woods‘ Scotty Cameron would sell for hundreds of thousands of dollars. Would it approach the seven-figure threshold? You’ll have to convince T-Dub to takes his paws off it. Once that happens, Carey says, that special Scotty could net a whopping $4-5 million at auction.

Apparently we might actually see this thing in an auction one day. According to Carey, Nicklaus, and various reports, no one knows where this putter is located. Is it in someone’s garage somewhere? Is it being held captive? We can only hope it shows up soon. But is its value greater than Tiger’s Scotty? Not quite, but it would still go for more than $1 million, Carey says.

3. Listen here to find out!

Come on, we can’t give away all the goods. Carey’s ultimate item he’d like to see auctioned off? It was used in the early 70s on a track unlike any other. Just know that Cary said this item would break all golf auction records. Our discussion about fantasy auction items begins at the 19:20 mark in the podcast below.

1 club from Tiger, Rory, Wolff and DJ's bags you can buy right now