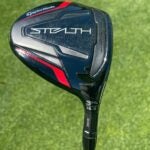 Scheffler finally swapped his Nike 3-wood for a TaylorMade Stealth at the WGC-Dell Technologies Match Play.

It was bound to happen sooner or later.

As part of the deal, a TaylorMade Stealth would soon replace the 11-year-old fairway wood, but the timing remained TBD — until this week at the WGC-Dell Technologies Match Play, where Scheffler officially swapped his 13.5-degree Nike for a 16.5-degree Stealth.

Considering Scheffler’s extensive history with the Nike fairway wood, the relatively quick change might have come as a surprise.

For Scheffler, his VR Pro Limited — a club that was initially released in 2011 — dates all the way back to his time as a member of the Highland Park High School golf team. Outside of a brief scare earlier last year when the face caved on his Nike gamer prior to the Sentry Tournament of Champions and he was forced to find a backup, the club has remained a bag staple.

“I put it away for a couple years in college, but I’ve used it the whole time I turned pro, most of my senior year, and pretty much all of high school,” Scheffler said. “I only wasn’t using it for two or three years in there.

“[I]t was really clean, not a lot of loft so I was able to flight it down pretty easily and it was softer than the new 3-woods and for me that’s important. And when I wanted to hit it far, I just teed it up a little higher, hit it higher on the face. I got to know the club really well and for me I knew exactly what I needed to do with it each time.”

According to TaylorMade Tour rep Todd Chew, Scheffler originally tested a 15-degree Stealth as a Nike replacement during the preseason, but the club exceeded his usual 3-wood carry distance.

“Scottie could actually do more with the Stealth 15.0-degree head, but it would go too far,” Chew said. “With the titanium Stealth Plus head he could hit it even further, but that’s not what he needs from this club.”

To solve the problem, TaylorMade suggested Scheffler try a 16.5-degree Stealth 3HL (the HL stands for “high loft”) at a shorter length to see if it produced a similar carry distance to his gamer.

[I]n Palm Springs we built him a Stealth 3HL 16.5-degree with a Fujikura Ventus Black 8X shaft,” Chew said. “His previous 3-wood was about 12.5 degrees of loft and in order to match launch conditions and distance with Stealth, we had to go to the Stealth 3HL, make it an inch shorter and finish the loft at 16 degrees.

“We were really close with matching launch conditions which was important to Scottie. It was coming out of a different window because of the difference in loft in the heads and he has since been able to figure out how to flight it the way he wants to flight it. The benefits of the 16.5-degree head are that he can hit it much higher and farther if he wants to but also match previous conditions, which were lower and feature more spin.”

While Scheffler’s Nike club has a cult following amongst gearheads, Chew pointed out that improvements in today’s technology make it easier for players like Scheffler to get the high launch they need to attack a par 5 in two, without the penalizing high spin that’s typically attached to fairway wood products from 10 years ago.

“That is the benefit of taking a lot of the spin out of the head and being able to use more loft compared to older technology,” Chew said. “With the previous club, you wouldn’t want to launch it higher in the air because it would spin too much. With today’s technology taking so much spin out of the club, you can use more loft which makes the club so much more playable and versatile.”

Considering the high launch characteristics, the club could come in handy in a few weeks when Scheffler tackles Augusta National. For the moment, however, he’s hoping it’ll produce some magic this week in Austin.