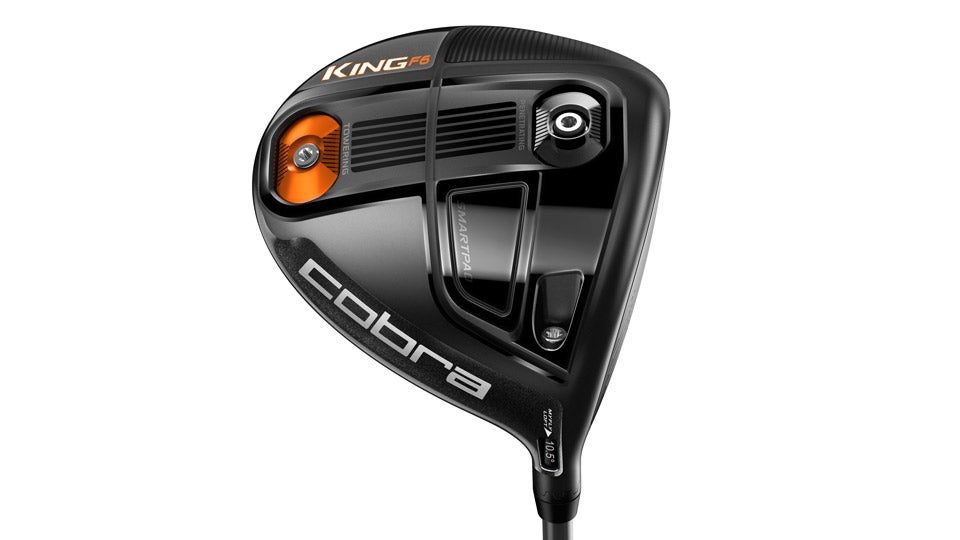 A 10g flip weight in the sole of the new F6 driver allows for customized CG location and performance; the front position promotes a lower trajectory, less spin, and more roll out while the rear position yields a higher trajectory, longer carry, and increased forgiveness on off center hits.

The F6 also features Cobra’s adjustable hosel technology that provides eight different loft settings including three draw (9.5°,10.5°,11.5°) and five neutral settings (9°,9.5°,10.5°,11.5°,12°). In addition, an adjustable pad in the sole can be used to create a square face angle regardless of the loft setting. A thinner and lighter clubface further contributes to longer distance while four color options (black, white, blue, and gray) give an option for players who want a custom look. A Matrix OZIK Red Tie 65Q4 shaft comes standard.

“The KING F6 family was created to bring the best zonal weighting technologies to golfers of all levels,” said Tom Olsavsky, VP of Research & Development at COBRA Golf. “Through improved material innovation and research we were able to design a stronger, lighter CarbonTrac structure that creates the perfect combination of adjustable low CG and high inertia. Something that is extremely hard to do. Thanks to the R&D team at COBRA Golf, golfers will discover the best in distance, forgiveness and precision in the F6 metalwoods.”

KING F6 fairway woods ($239) feature similar adjustable weighting technology as the driver through the use of 20g and 3g weights that can be manipulated to locate the CG in the front or rear of the clubhead.

KING F6 hybrids ($199) will also be available but feature a fixed 13g weight in the rear of the clubhead to improve forgiveness and launch conditions. Both the fairway wood and hybrids feature thin clubfaces and Cobra’s “speed channel,” technology that produces enhanced ballspeed and distance.

The multi-material construction of the new Cobra KING F6+ driver features a titanium face and body along with a lightweight carbon fiber crown, an arrangement that positions the CG of the clubhead low and deep in the structure for improved forgiveness and launch characteristics. The weight saved through the use of carbon fiber allows for a lightweight track on which an 18g weight can be moved to produce five different CG settings from front to back. The sliding weight design allows players to custom tune CG position to produce the trajectory and spin characteristics that best fit their needs. Other features of the King F6+ include a thinner, lighter, and faster clubface and an adjustable hosel that provides eight different loft positions including three draw settings. Matrix Black Tie 65M4 shaft comes standard.

A KING F6+ Pro model driver with a lower range of lofts (7° – 10°), a flatter lie angle and three adjustable fade settings (instead of draw settings) will also be available for players who prefer slightly lower spin rates and a more penetrating trajectory. The new King F6 irons are built with a progressive design aimed at optimizing each segment of the set; the long irons (3-5) feature a full hollow cavity design for maximum distance and forgiveness, the mid irons (6-7) feature a half hollow construction for a combination of distance and control, and the short irons (8-PW) are built with a cavity back design for spin and control. The shorter wedges in the set are traditional and are optimized for versatility and maximum spin.

Each segment of the set also features a different type of milled groove to optimize spin rates. To further improve the performance of the long and mid irons an aluminum insert is placed in back of the cavity to shift more weight (10g in the long irons, 5g in the mid irons) lower and deeper in the clubhead, producing higher launch angles and improved forgiveness. Enhanced ballspeed and distance come from a channel behind the clubface and in the sole that provide increased face flex.