LOS ANGELES — Former major leaguer Alex Rodriguez signed two of the biggest contracts in baseball history ($275 and $252 million) during his time with the New York Yankees and Texas Rangers, but the clubs he was hitting on the Riviera Country Club range Monday certainly didn’t reflect his considerable wealth.

Rodriguez’s random hodgepodge of equipment — he was in town to play in Tiger Woods’ Celebrity Cup event — was a head-scratcher.

Indeed, in all my years covering the golf equipment beat, Rodriguez’s gear setup may be the most shocking I’ve ever seen. Thankfully, someone talked Rodriguez into putting a fresh set of sticks in play for the event. Regardless, here’s a look at what A-Rod brought to the Riviera range on Monday.

1) His driver is non-conforming 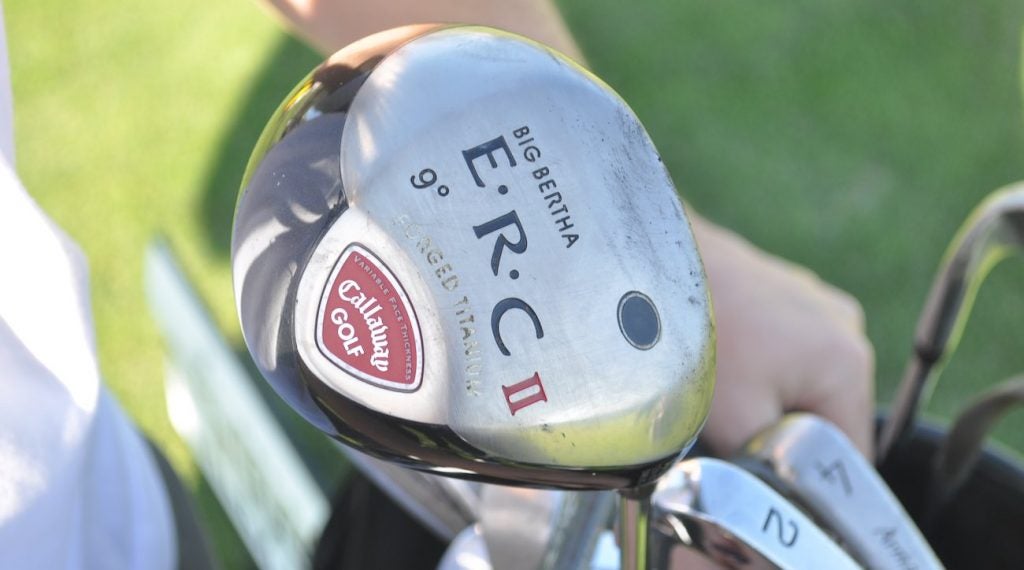 Lucky for Rodriguez, the event he took part in was nothing more than a friendly “hit and giggle.” I mention this at the outset because the only metalwood in his bag — he doesn’t carry a fairway wood —  was a non-conforming Callaway Big Bertha E.R.C. II driver.

If you’re deep in the gear scene, you likely know this was the driver that caused Arnold Palmer — a Callaway spokesman at the time — to explain his position on the company selling non-conforming products, and why he disagreed “with the USGA’s stated position that the ERC II is a threat to the game.”

Given the state of his current equipment setup, I’m going to assume A-Rod doesn’t know or care that the club is extra spicy. 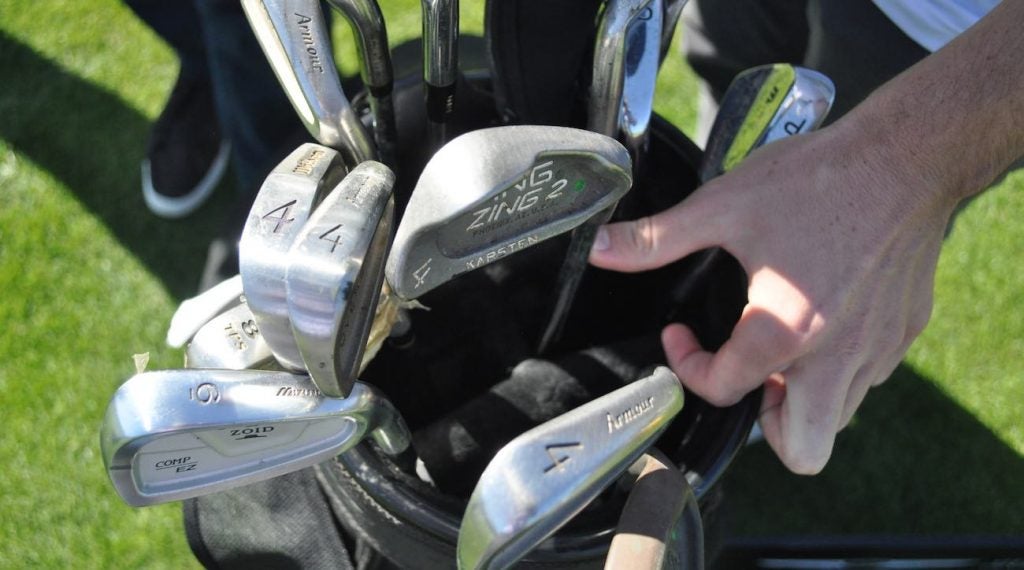 Rodriguez wore numbers 3 and 13 during his time in the big leagues, which makes me wonder why he chose to carry four 4-irons instead of, say, four 3-irons. Either way, the man likes his long irons — and they come in all shapes and sizes. I counted two Tommy Armour 845 Oversize, a Wilson Pro Staff Womens Design (you read that right), and Ping’s classic Zing 2. There doesn’t appear to be any rhyme or reason to the setup.

With 16 clubs in the bag at the time photos were snapped, he could take out a couple to get legal and still have two remaining — just in case.

3) The 8-iron still has plastic on the head 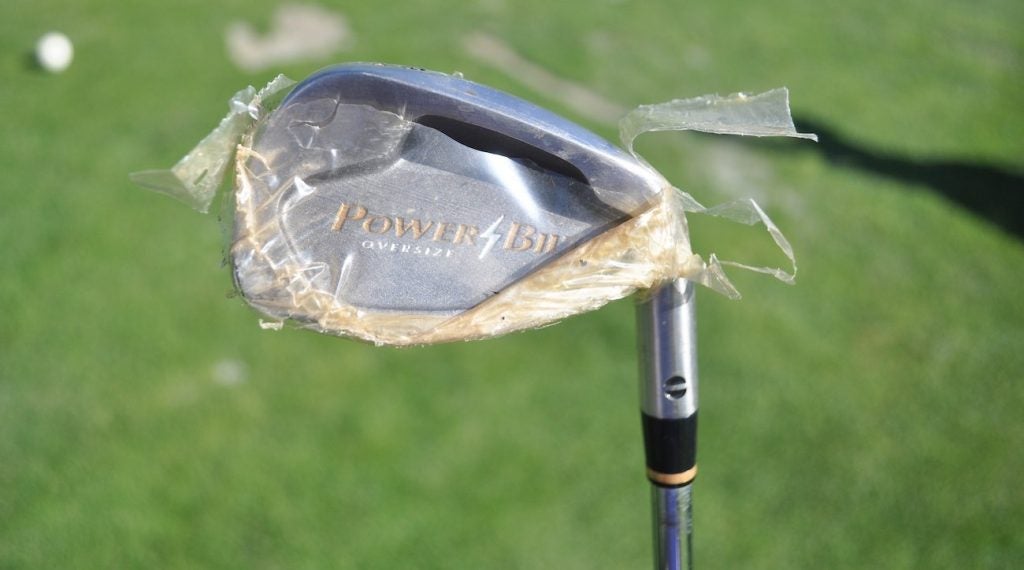 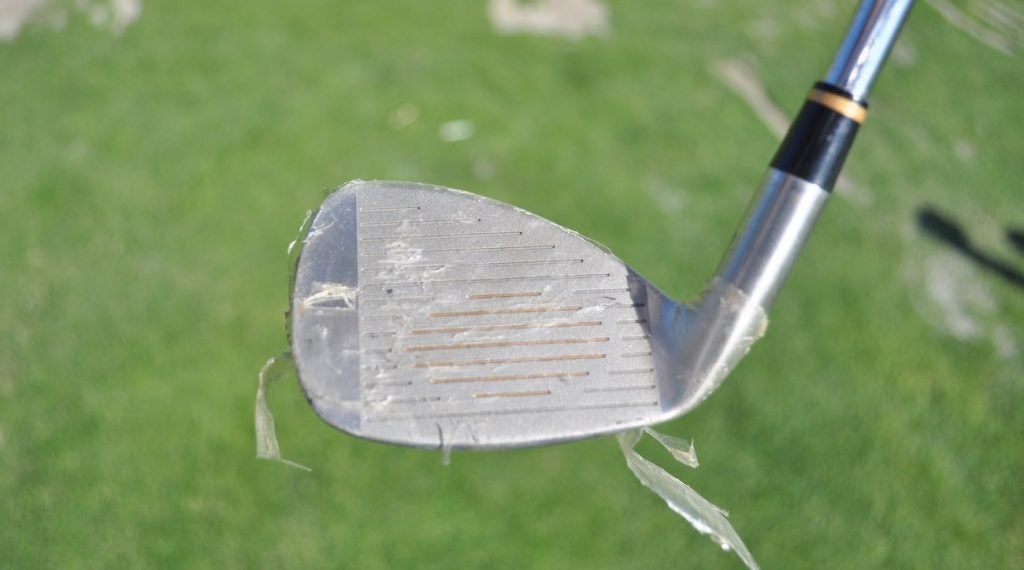 The PowerBilt Oversize 8-iron was without question the most confusing club in Rodriguez’s bag. Is there a performance benefit to leaving the plastic on the head instead of removing it? I’m probably going to go home and test the “A-Rod Theory.” Based on the state of the plastic protecting the face, the wear marks lead you to believe he’s actually used the club — in its current form. I’m at a loss for words. 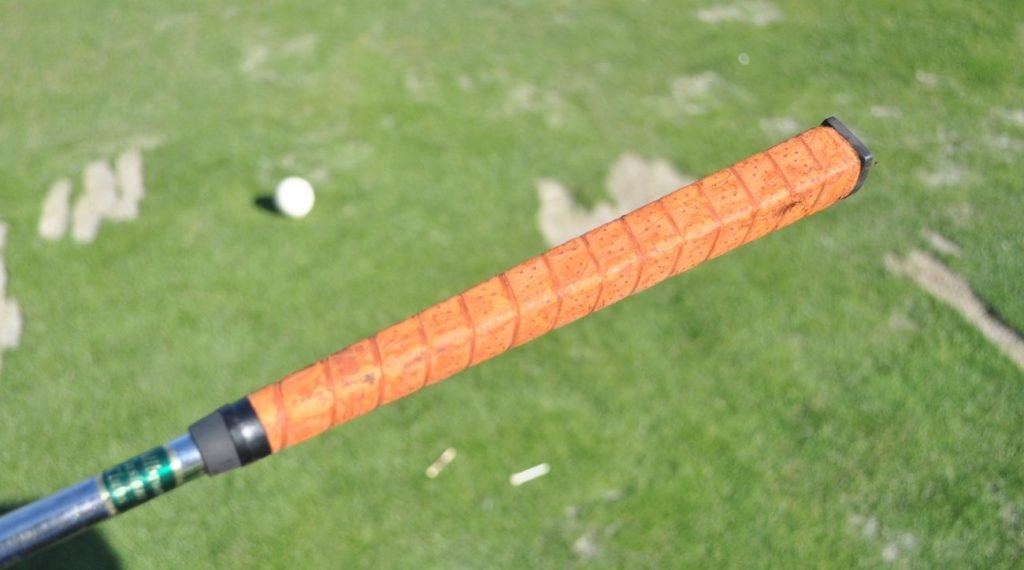 I don’t know about you, but I loved the old-school Winn grips. The soft rubber material made it feel like you were holding a pillow. Rodriguez still has a squared-off version attached to his putter. And if you thought the grip was great, wait until you see the putter itself.

5) He has a baseball bat-shaped putter 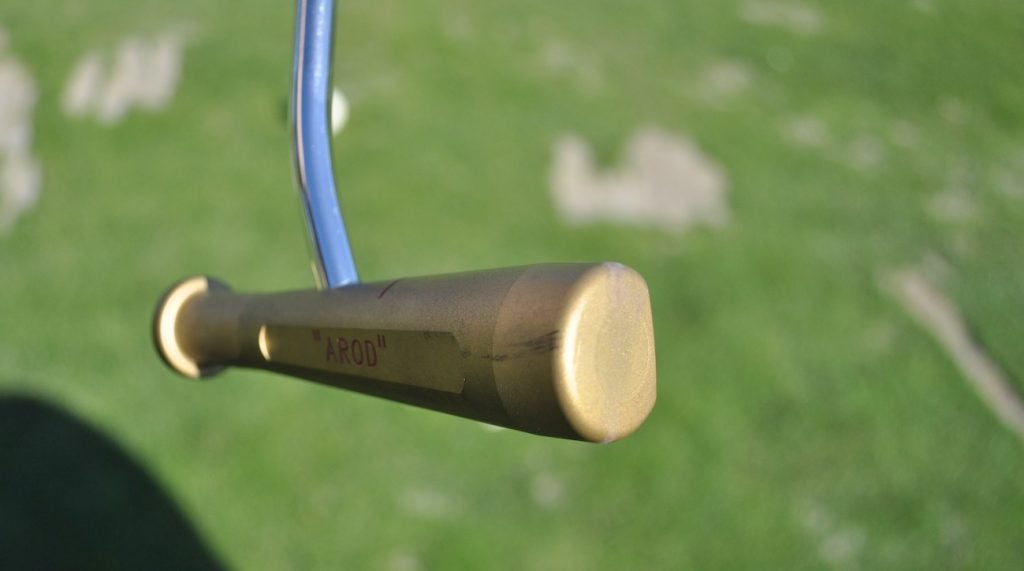 I didn’t even know this putter existed until Rodriguez rolled up to Riviera with a baseball bat-shaped wand featuring “AROD” stamped on the side. The putter has a single red alignment line and one of the smallest faces known to man. I know Tiger Woods “dimed out” his Scotty Cameron Newport 2 GSS, but might I suggest Rodriguez look at something with a bit more forgiveness?

Unless he’s playing regularly, a mallet could help him save strokes. Then again, it doesn’t look like a baseball bat. 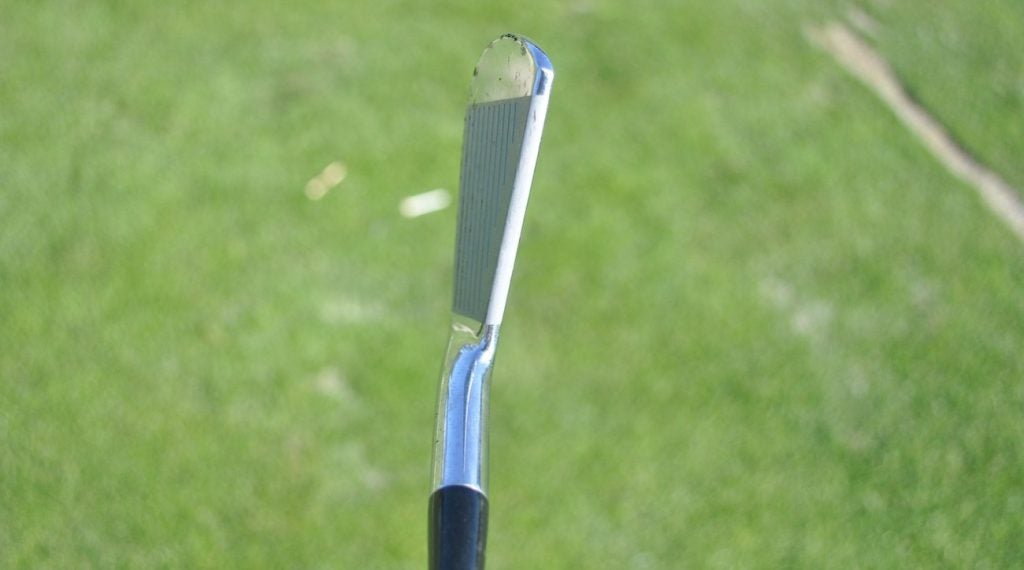 Maybe Rodriguez has Tiger Woods’ patented stinger in his back pocket, because that’s literally the only reason someone should be carrying a Mizuno MP-29 2-iron. No doubt this club would give Rory McIlroy the shakes all over again. How about a game-improvement version or a hybrid? There’s a multitude of options out there offering a ton more forgiveness.

With iron technology improving by leaps and bounds since MP-29 was introduced, there’s no reason anyone should be playing something this unforgiving — unless they’re an elite ball-striker or have a PGA Tour title on their resume. Even Nick Taylor used a game-improvement 4-iron to win at Pebble. 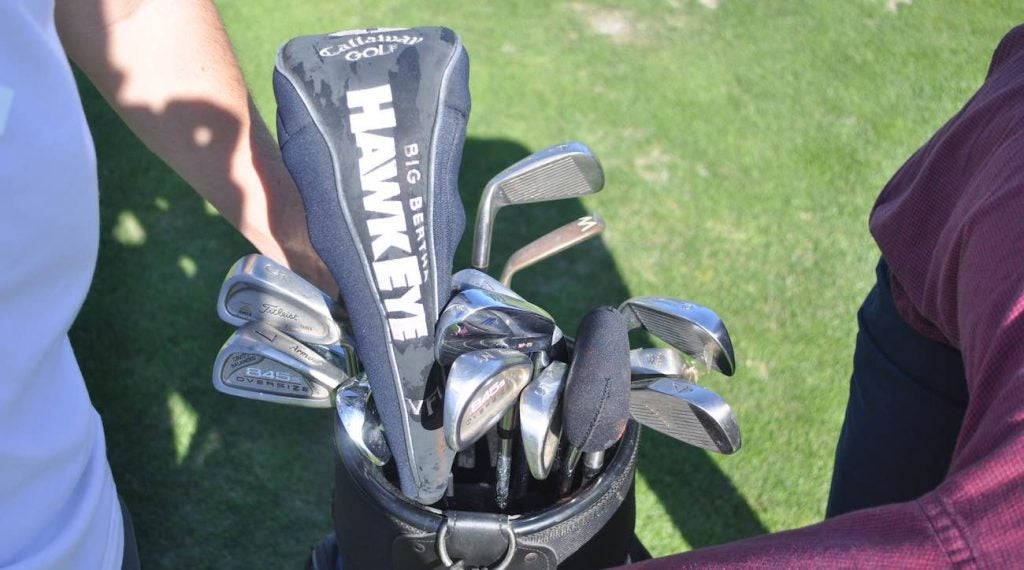 It seems fitting that A-Rod’s mixed bag has a headcover that doesn’t even match the driver. That would be a well-worn Callaway Big Bertha Hawkeye cover protecting his Big Bertha E.R.C. II driver. The eclectic setup continues! 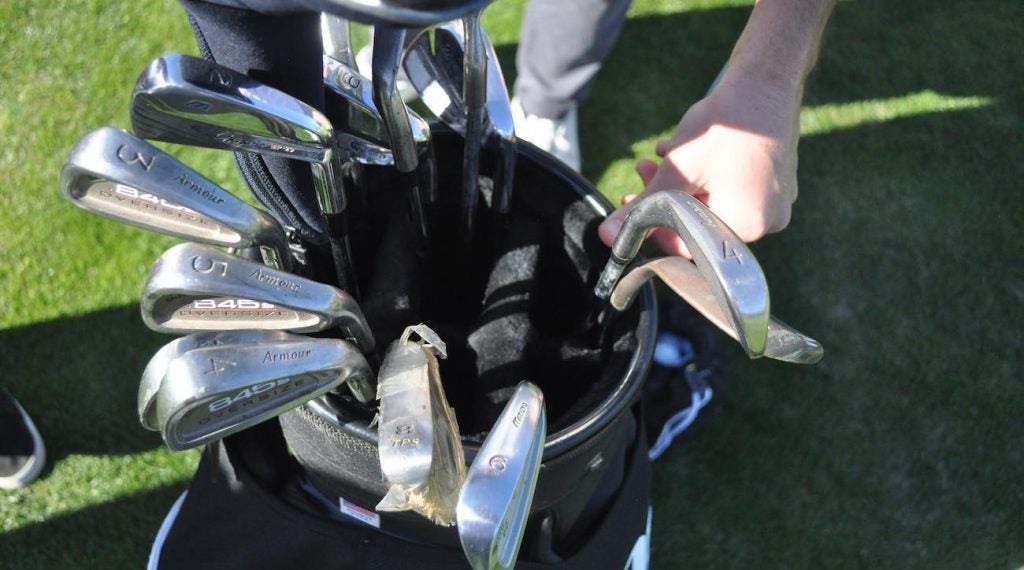 Sticking with the eclectic theme, I counted seven brands in the bag, including a single Titleist DCI 981 5-iron and Mizuno T-Zoid Comp EZ 6-iron. Blended sets are en vogue at the moment on the PGA Tour, but this is taking things to the extreme. Someone should seriously consider buying A-Rod a club fitting appointment for his birthday. 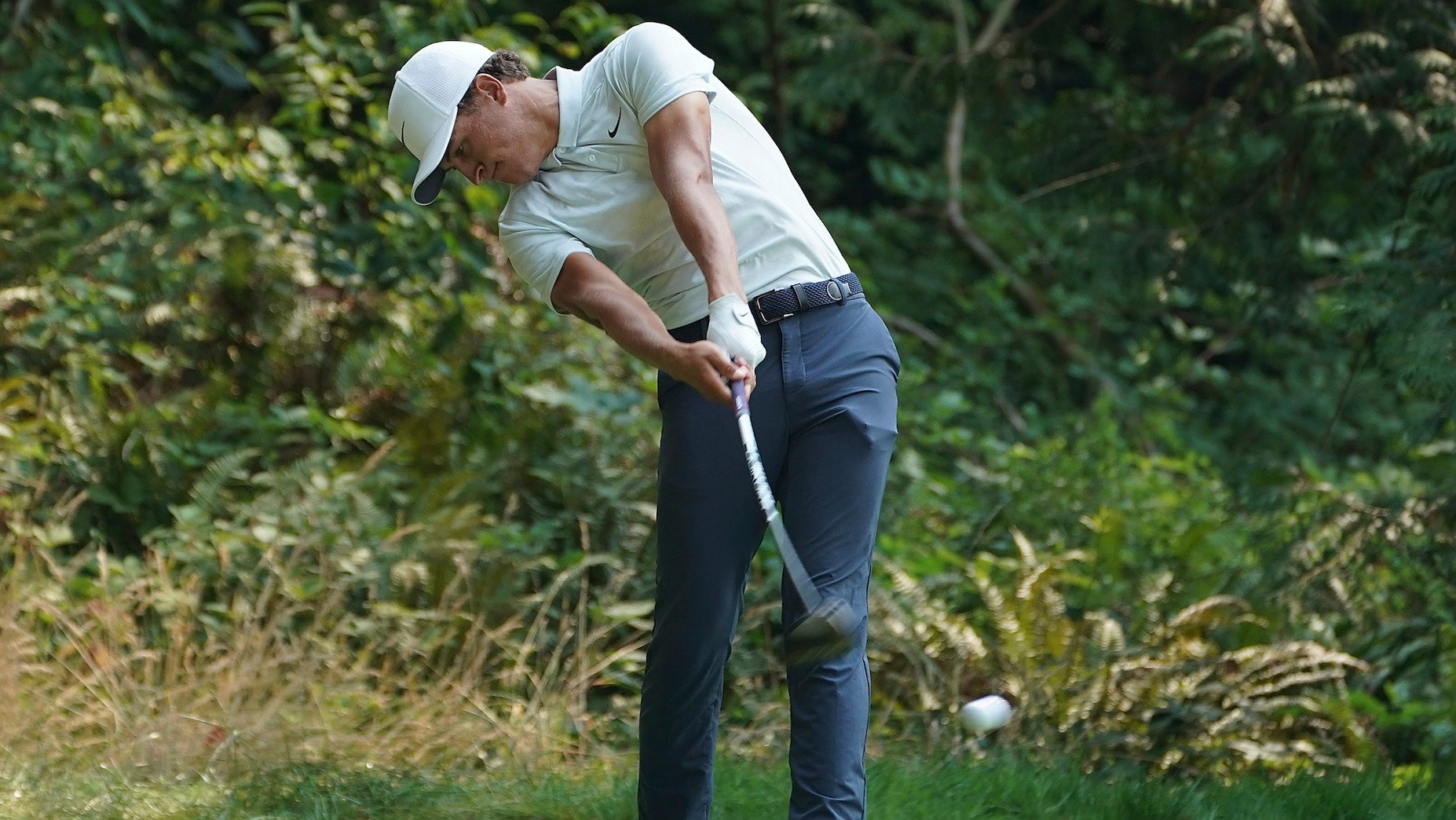