10 Fairway Woods to Give Your Game More Muscle 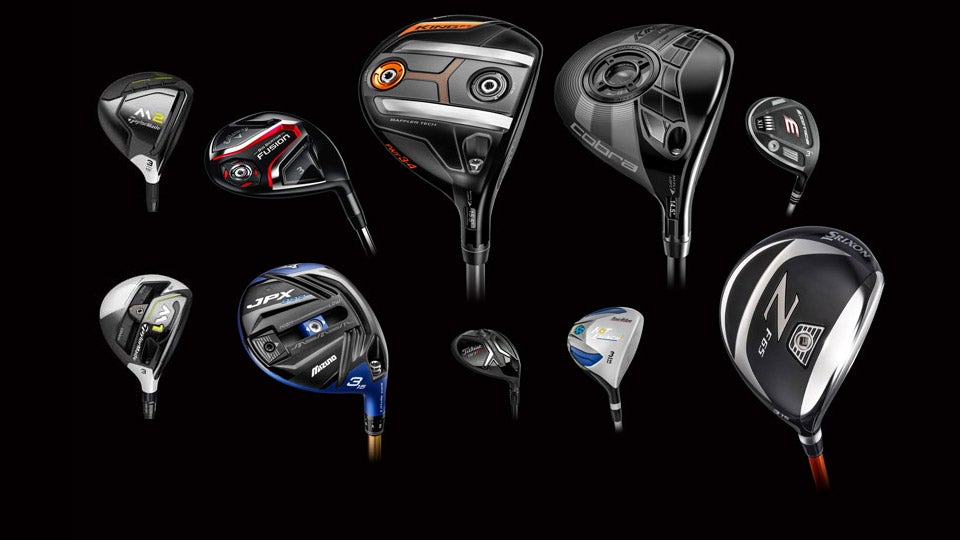 See below to learn about these 10 new fairway woods.

Today’s drivers get lots of ink — stay tuned in February for our annual ClubTest — but most of the impressive technologies engineered into them also find their way into their smaller brethren. What’s more, some high-tech fairway woods provide nearly the same COR as do drivers. That means you just might launch a 3-wood as far as you hit the big dog. As for adjustability, today’s fairway woods can be tweaked for CG location, trajectory, spin rate, shot bias and loft. Here are 10 hard-hitting new models to help you find more fairways and even reach some par 5s in two.

[product:2584303]This club has the need for speed. Callaway’s forged face cup, made of high-strength Carpenter 455 stainless steel, amps up ball speed across the hitting area. And a “Speed Step” crown should help with aerodynamics and improve ball speed, too. In addition, a 6-gram Triaxial carbon crown — 80 percent lighter than a typical stainless steel crown — allows 25 extra grams to be used in the elongated head’s perimeter for increased forgiveness and launch. In fact, the MOI is 19 percent higher than the company’s XR16. Comes in 15º, 18º and 21º lofts.

Bet on black. The identical club to last season’s King LTD now has a sleek, all-black paint job. The multimaterial carbon-fiber crown (20 percent lighter than steel) lets designers move mass low and away from the face. They placed much of this weight in a sole port that increases MOI and launch. Plus, a narrow channel around the face boosts ball speed on off-center hits. The adjustable hosel provides eight positions (by half degrees), including three draw-bias options. Available in 3-4 (13º to 16º) and 4-5 (16º to 19º) versions with the Aldila Rogue graphite shaft.

Harking back to the company’s original design, the King F7 features a progressive rail system along the sole (shallower in the 3-wood and deeper in the 7-wood for a steeper attack angle) to improve turf interaction. A high-strength forged-steel face insert flexes more at impact (for better ball speed), while a choice of front or back CG locations allows you to dial-in trajectory. You can change CG using 2- and 20-gram sole weights and tune loft +/- 1.5º without affecting face angle. The King F7 is available in 3-4 (13º to 16º), 5-6 (17º to 20º), and 7-8 (21º to 24º) with a Fujikura Pro 65 shaft.

Behold, a tinkerer’s dream wood. Launch angle and spin rates (up to 450 rpm) can be adjusted by moving a 15-gram weight along the sole track. Sliding the weight closer to the face reduces spin and lowers launch; moving it away from the face sends shots higher with more spin. Each head (15º, 18º and 21º) can be adjusted by 4º loft. The “shockwave” sole — a channel behind the face backed by several smaller channels — lets the head flex more at impact to increase ball speed, while positioning more mass low for improved launch. The multi-thickness crown further contributes to mass down low.

Every yard counts, and these babies have an 8 percent larger COR area than before, leading on average to four extra yards. There’s a larger sweet zone thanks to the maraging-steel cup-face design the company uses in its current drivers. Weight pads in the heel and toe increase head stability, while a ripple in the crown (13.5º, 15º and 17º only) lowers CG to boost launch and decrease spin. The 19º has a channel along the crown to let the body flex more, which increases ball speed, launch and spin on shots that strike the upper part of the face. Available with Miyazaki Kaula MIZU 6 shaft. Like its predecessor, the new M1 has a carbon crown, which lowers the club’s CG and leads to higher launching shots. This stick is highly adjustable and can be tuned for shot bias and loft. A single 25-gram weight in the sole (the previous model has a pair of 15 gram weights) can slide to the heel or toe to promote draw or fade bias. Plus, a new “open channel” speed pocket generates more speed, increases launch, and reduces spin up to 300 rpm on shots struck low on the face. In addition, the new high-strength steel face provides faster rebound (higher COR) than before. Players who like the forgiveness, higher launch, and pop of the previous M2 but want adjustability and shotmaking versatility should take a hard look here. M1 fairway woods come in 3 (15º), 3HL (17º), and 5 (19º) with Mitsubishi Rayon Kuro Kage TiNI shaft. In stores January 27th. A slightly larger head and longer, more flexible speed pocket make the updated M2 more forgiving than the current version. The improved speed pocket combines with a high-strength steel face that has the company’s inverted cone technology to yield faster ball speeds — and more distance — on misses. A carbon crown and revised fluted hosel shift more mass lower in the head to promote higher launching shots, while external ribs and polymer in the sole improve sound and feel at impact. The M2 is available in 3 (15º), 3HL (16.5º), 5 (18º), 5HL (21º), and 7HL (24º) with TaylorMade ReAx graphite shaft. There is also an M2 Tour model with more compact head. M2: $250; M2 Tour: $300. In stores January 27th.

You know what’s almost as good as pure contact? A mis-hit that goes nearly as far! With an updated high-strength steel face and refined Active Recoil Channel on the sole, the 917s increase ball speeds on mis-hits for greater consistency. And you can adjust CG location using a 14-gram sole weight. (The 917s come with a neutral weight and a draw-fade weight; only one fits at a time.) On average, the 917s carry three to seven yards farther than the 915F and 915Fd. The 917F2 has a slightly larger profile and offers more forgiveness, while the lower-spinning 917F3 provides more shot-making opportunities.

For more yards, dial 9-1-1. The XJ1 is made from 9-1-1 titanium, which is stronger and 10 percent lighter than standard Ti, for a thinner, more flexible face and bigger distance. A tungsten sole makes up two-thirds of the head weight, producing a very low CG and high launch angles from most lies. A 12-gram tungsten screw in the heel yields a slight draw bias, encouraging a faster release through impact. Comes with a 45-gram Fujikura Air Speeder shaft.

A shallow face with variable thicknesses helps increase flex and ball speed on mis-hits. The Hot Launch 2 also has a 10-gram plug (almost twice as heavy as the previous model) in the back of the sole that adds to the low, deep CG and contributes to high-launching shots with low spin. These woods are available in 15º, 17º, 19º and 22º lofts in standard or offset models (to combat slices).